What in the world is this story?

On paper, I agree it seems like a great idea…Darkseid vs another evil titan and this conflict taking place on Earth. 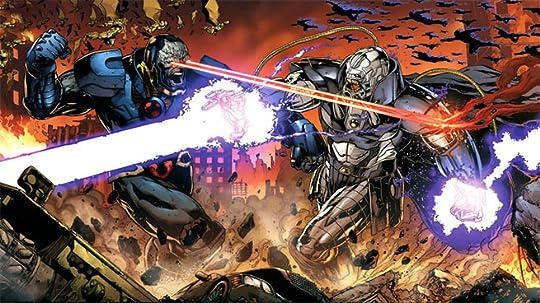 Breaking News – The Damian Wayne Robin is a major sociopath and needs immediate fixing before he breaks Batman’s patience (which, considering it’s Dick Grayson, is no mean feat). It has been decided that the best way to deal with this is to drop him into a group of teenage heroes with their own issues. Stay tuned to see how well this does not work.
END_OF_DOCUMENT_TOKEN_TO_BE_REPLACED

Grayson, Vol 2: We All Die At Dawn by Tom King

When you title a series Grayson, and most of the hype around said series revolves around the presence of said Grayson, one would expect this Grayson to actually be in his own book.
Instead, we’re lucky enough to receive glimpses of Agent 37 as he occasionally pops up to grace the pages just when you’re starting to lose interest in the threadbare story.
END_OF_DOCUMENT_TOKEN_TO_BE_REPLACED

Where is Jake Ellis? by Nathan Edmondson
My rating: 2 of 5 stars

Disappointing, after the first volume. This one felt far less polished, and the characters seemed somewhat dumbed down. Jon in particular makes incredibly foolish mistakes early on. Yes, I know that Jake was always the brains of the operation, but he does something that’s so jaw-droppingly absurd that it took me out of the story. Because, under these circumstances, why would you ever approach an American embassy for help? What happens is exactly what you would expect to happen, and it’s so frustrating that Jon never even considers that option, especially because he’s endangering others.

It’s more than that single narrative misstep, though. I’d loved the first Jake Ellis book because it ran smoothly on ever level, and this one just sort of stumbles around on all the same levels. Which is quite disappointing, because I was excited about this book. The one new and interesting thing that this volume does offer is the blind operative on the other side of the fence from Jake and Jon. I would have liked to see more of this character, but obviously there wasn’t quite enough room for that here.

This isn’t the follow up that I’d been hoping for. It isn’t terrible, just terribly disappointing. Then again, maybe I wouldn’t feel quite so let down if I hadn’t been waiting so long for it to show up.

At this point, I’ve more than given this new version of Batgirl a fair shot, and I feel fully justified in saying that I just don’t like it at all. To me, this character simply doesn’t feel like the Babs I know and love. She’s an entirely different person trying to fill shoes she isn’t ready for. I don’t know, maybe I would like the character more if she were totally original, instead of an original character masquerading as a familiar one.

And maybe I’d be more ready to like this new Babs if she had a good storyline. But that’s a major miss. The closest thing to a big villain this books is a Cheetah rip off, a rich girl who likes tigers and… Yeah, that’s about it. But probably the worst of it all are Dick Grayson’s guest star appearances. Why, yes, Dick is indeed supposed to be dead, and is supposed to be deep under cover. That’s why his first appearance is a hopelessly cliched “hiding around every corner!” gimmick, but it doesn’t explain why he decides to blow his cover by approaching Babs at her friend’s wedding. I couldn’t believe that he’d risk his position so easily, and I still can’t. It wasn’t even in service of a good story, it’s just a half-hearted attempt to put distance between Babs and Dicks. You know what would have done that even better? Dick not blowing his cover.

I can see that a lot of people are really loving this book, but for me it’s such a big no. I miss the old Babs.

Martian Manhunter Vol. 1: The Epiphany by Rob Williams
My rating: 2 of 5 stars

For everything that’s good in this book, there’s at least one thing that’s boring or overly convoluted or poorly written, which is quite a shame.

Good: J’onn at the beginning of the book, Mr. Biscuits, J’onn’s choice to try to protect his adopted world.

Not good: A story that’s fragmented between too many characters, weak characterization, characters making decisions that make no sense in the context of the story, and a plot that’s more convoluted than complex.

On balance, there wasn’t enough good to outweigh the dull, which is unfortunate. I’m not a big fan of J’onn, but I’ve always liked him when I saw him.

You’d think there’s very little that could go wrong with this. Like, the backstory of an awesomely megalomaniac villain must be fun to read.

Welcome to an interview with Thanos, folks.
END_OF_DOCUMENT_TOKEN_TO_BE_REPLACED

(Received from Netgalley for review)

After reading both volumes of Grayson, I’d venture to say that the one problem with this book is, in actual point of fact, the title character. Because if you can ignore that this is meant to be Dick Grayson, formerly Robin and Nightwing, and treat him as an entirely new character, then this is a decent spy book. Making the main character Dick just brings in a whole host of issues, including that Dick just isn’t suited to be an undercover spy who will be expected to kill for long periods of time. And this is evidently meant to be an open ended investigation. It’s an incredible stretch for me to believe that he’d be able to evade suspicion for even a few weeks, much less for as long as he has.

That’s not to say that, once stripped of the paper thin Batman tie in, it’s a great book. Midnighter just keeps showing up, which I was not thrilled with. Nothing against the character in general, but is pitting him as Grayson’s antagonist really what DC wants to do with this character? Because there’s very little done to develop him, so there’s nothing to really distinguish him from Random Smartass #3. I guess this was being used as the launching point for his own book, but it doesn’t help this one.

Now, the first issue in here, the desert story, is actually really good. It’s easily the best thing in the book. Unfortunately, the momentum kind of peters out from there. Again, not bad, just ok. Honestly, it feels like the whole series is just treading water, because this has finite written all over it and there obviously has to be some kind of end in mind. But this just felt like stretching out the series to stretch it out, not that there was something actively being worked towards. I don’t know, maybe it’s just going over my head, but I don’t feel like we’re going anywhere.

This was just ok. The story is kind of blah, not much to write about. A mysterious new hero shows up who’s even less compelling than Superman normally is for me, which is fine because he’s really a shell for Circe’s vaguely defined revenge. I guess it’s supposed to be an object lesson in how these heroes who routinely save people by the thousands and occasionally the millions need to care more about individual people. And I take the point, I really do, because that’s one of the things that irked me about the Man of Steel movie- did you realize that more people were saved by Marvel’s bunch of a-holes than DC’s Boy Scout? Because I totally did. But the point is clumsily made, so much so that I never really had the feeling that it had been absorbed. Except surprise! It totally was, by like osmosis or something, because Diana gave no indication of even really paying attention to the object lesson. Ok, whatever.

This might have been a three star book, except holy crap is the art bad. It’s really incredibly ugly. The faces aren’t just attractive, they’re really odd looking. And not like this is the artist’s unique style, more like this is the best the artist could do. He’s trying really hard to make attractive people! And failing badly. It could make some pages outright unpleasant. Mediocre writing and bad art equals two stars for me.

Secret Origins Vol. 2 by Brian Azzarello
My rating: 2 of 5 stars

It took me several days to read this tombstone. I am just going to do one line impressions of each story, ’cause I’ve had a long day and this is not worth it.

Chapter 1: In which the Stone family is introduced through some lame dialogue and DC screws up their own timeline while Victor deals with anger management issues.

Chapter 2: In which Bruce Wayne has a George Clooney chin but not the vinyl suit and Jason goes for ninja training to deal with anger management issues.
END_OF_DOCUMENT_TOKEN_TO_BE_REPLACED