Well that was surprisingly really fun.
I much prefer puns and slightly intellectual jokes to Deadpool’s brand of risque humor, but this one made me snicker to myself a lot.

The story follows Deadpool in his attempts to befriend Spiderman, who quit the Avengers for some vague reason I don’t get. Of course, since this is Deadpool, his ulterior motives have ulterior motives, so things are fairly complicated. 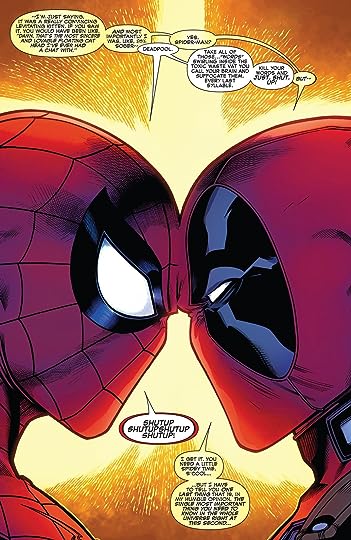 Ok, it isn’t that complicated. Wade has been assigned a hit on Peter Parker and Spidey is his way in. Shenanigans ensue. For the first two and half issues, it’s a riot.

Spoilery bit: I loved it when DP kills Peter shortly after Shiklah resurrects him – “it’s like turning a light off and on and off again!”

Then somewhere the story got a tad weird, which considering that this is a story with this panel… 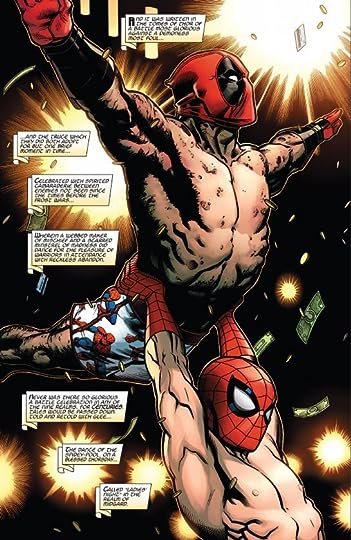 …is saying something. Like there was a glass house and Spidey had a black suit and Deadpool has smooth skin now? What?

Someone explain it to me! Was the price of Peter’s soul DP’s healing ability?

Anyway it ends waaaaaaaaaaaaaaaay too abruptly for my taste. If someone has read the second volume and thinks it’s worthwhile, do tell me.

Yeah, in summary, really fun, even considering the chopped ending.

1 thought on “Spider-Man/Deadpool, Vol. 1: Isn’t it Bromantic by Joe Kelly”