Grayson, Vol 2: We All Die At Dawn by Tom King

When you title a series Grayson, and most of the hype around said series revolves around the presence of said Grayson, one would expect this Grayson to actually be in his own book.
Instead, we’re lucky enough to receive glimpses of Agent 37 as he occasionally pops up to grace the pages just when you’re starting to lose interest in the threadbare story.

Now you see me, now you don’t…

Some of my disinterest probably comes from the fact that I haven’t read the first volume, but I think I got the gist of the thing eventually. There were some magic body parts involved (no, not that kind) and a super-baby that no one knows is a super-baby? Okay, so maybe I should have thought about it a bit more.

I’m gonna go through this story by story to make it easier to follow (aka I’m too lazy to do anything else.)

Story 1: We All Die at Dawn

So Grayson, Helena and Midnighter are all panicking ever so slightly because their jet is about to crash and there’s a lady on it who’s in the process of giving birth. Midnighter becomes the Midwife instead and Dick’s acting as a cheerleader in the background, while Helena struggles to land the plane without killing all of them. We’re off to a good start then.
The plane does crash and the baby does get delivered safely, but for some reason, the mother dies and our heroes don’t. I remain mystified by this.
Cue happy realization that they have not only crashed, they did it in the middle of absolute nowhere in a blistering desert with little to no supplies. Even better, the nearest town is only a 200 mile trek away. And the road trip begins.
The rest of the story is Midnighter being the most whiny brat he can be, Helena pretty much just dying of blood loss and Dick being fabulous with artful stubble and a baby in his arms. 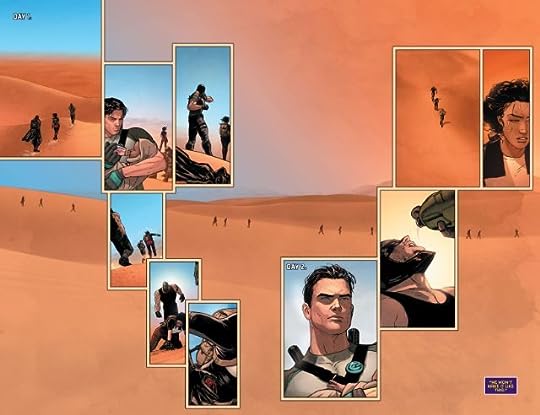 I’m not complaining when he gets shirtless. Nope.

Eventually Helena is left to decorate one spot in the desert, Midnighter another, and Grayson also almost joins this box of baubles (insert pretty boy comment) when a very convenient childless couple just happens to pass by. The End.

In summary: Despite the sketchy beginning, and even more questionable ending, I actually liked this story for its take on Dick as a person. He’s shown to be heroic because he has unwavering resolve and kindness, and that’s what I’ve always liked about him: he’s genuinely a nice guy. The whole thing was obviously engineered to appeal to any female with a still beating heart (and maybe some gents as well) – there’s baby cuddling, aforementioned stubble and well drawn abs, and even some tragic past monologues, as if we didn’t like him enough already. Art-wise too, it was well done, with gorgeous panels of sand dunes showing the empty loneliness of the desert. Sadly, after this, the art quality declines rapidly and we never see Dick again, so that’s that.

Story 2: The Brains of the Operation

This one starts with a zombie orca on wooden legs trying to eat Grayson and Helena. I’d like to know what the storyboarding process was here. Did the writers sit down and go:

“We need to start this one with a bang. Any suggestions?
“Let’s see, what would a pair of spies encounter on a reconnaissance mission of a high-tech criminal hideout?”
“I know! A killer whale that crawls around on land with spider legs!”
“Brilliant, now we can have that coffee break!”

Anyway, while Helena is messing with some dude’s mind, Dick gets kidnapped by Midnighter (who apparently recognized him by his butt, no wonder Batman wears a cape) and they have a man to man talk in the usual way – by beating the living daylights out of each other. From this point on, we will never see Agent 37 from a normal angle again. Prepare to console yourself with views of the back of his head or break-dancing shots.
Midnighter locks him up after confusing Dick with a Hypnos implant, the logistics of which I still don’t understand, but whatever. An ambiguously Asian granny called the Gardener annoys Grayson with the realization that the badly named evil syndicate, the Fist of Cain, plans to disrupt an Israeli peace rally by using the negative feeeeelings of…the Brain. Yeah, that was mumbo-jumbo and you’re gonna have to deal with it.
Helena figures out the same thing after her seance and Grayson flails a bit. The End.

In summary: That was super-boring and difficult to follow. Nothing about anybody’s actions made sense. It was after I read the entire volume that I realized that the Gardener was supporting the Cain clan – until then her ambiguous dialogue made me think she had some other agenda in mind. The art is kinda psychedelic in here, and nothing to write home about. It’s worth noting that though the next story continues this plot, everyone looks drastically different in it. Grayson’s eyes go from blue to black, he suddenly gets a major dose of hair gel in prison, the Gardener’s hairstyle changes…
Hint to DC: when you aim for the female demographic, these kind of details matter. We notice.
Basically this is the frying pan, and the next story is the fire.

In case you weren’t already dumbfounded by the illogicality of the last story, listen to this: the villains plan to instigate mayhem by holding a rock concert and unleashing the power of the Brain. Which begs the question of why a peace rally would have a concert in the first place. The stupidity continues, as the Gardener just decides to let Dick go after all the shenanigans in the last story. Ah, the power of true love.
He arrives just in time to see Helena fail to stop the idiots they call antagonists and the crowd goes wild. Literally. Midnighter also has a sudden change of heart because intentions are like disposable forks around here and joins in the heroic fray.
Then we get a very long action sequence that is best summed up by Grayson doing some fancy street dancing:

They win since Dick is immune to the evil Brain, because plot convenience yo. Even more ludicrousness as Helena kisses our golden boy in an attempt to stay sane.
*hysterical laughter ensues*
Yeah, right. Kissing Dick Grayson to clear your brain, that’s a hoot.

In summary: I don’t know what just happened. I don’t care.

Story 4: A Story of Giants Big and Small

This one is an intermediate page filler that seems to have been written on the behest of the Irish tourism board. If it wasn’t, please explain the appearance of the two page map and St.Francis. You can’t, can you? Thought so.

Here, Grayson and Helena are out in Ireland doing a double agent thing in an attempt to take down a magical mobster call St.Francis. This apparently has something to do with the organ trafficking from earlier, but as I’ve come to expect, they don’t explain it well. They do this by trussing Helena up and Dick masquerading (literally) as a long dead minor scientist villain. Confusion ensues, and they get their man, not bothered about the consequences to other people.

More nonsense in the form of a Batman gambit by our beloved Spyral agents and a truly obscure conclusion. Again, one of the storyboard people thought that the masks from the Mission Impossible series were a brilliant idea and decided that the entire plot should hinge on it. Because that worked so well the last three times they did it.

The artwork is so bleary, I suppose it had something to do with the local weather. Truly immersive stuff, this: 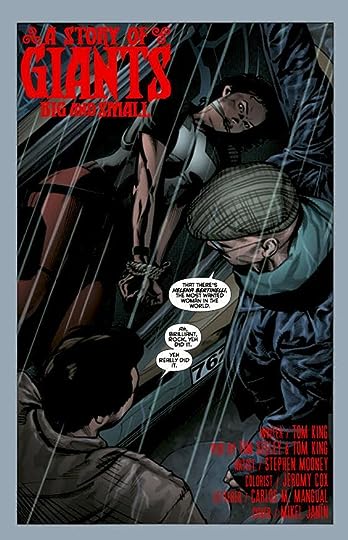 In summary: I don’t really understand what this story was trying to prove. That Spyral agents make up twisted schemes? That Dick and Helena have great teamwork? That it rains a lot in the UK? That Ireland is really green? WHAT WAS THE POINT DC? WHAT WAS THE POINT?

Story 5: Cross My Heart and Hope to Die

We finally get to the end of this mess. And I for one, am relieved.
In this one, the hidden agenda of the mysterious Spyral director Minos is finally revealed, and I still don’t know what it was. He sets off a series of things that rapidly – wait for it – spiral out of control. It starts with a conversation between Minos and Helena, at the end of which he shoots her in the heart with a crossbow. Naturally, having plot armour instead of actual bullet proof vests, Helena survives and wheezes to Dick that Minos has thrown them for a loop.
If you’re wondering, the puns come naturally to me.
Dick explodes out of the gym class he was teaching and discovers Agent 1, a random hot Arabian dude, fighting off a Justice League clone villain called Paragon. I sit in the back yawning and having Amazo flashbacks.
Grayson proves himself to be fabulous and the DC universe to be complete BS as he takes down Paragon really easily, in essence, defeating the Justice League by himself. Don’t forget his gaggle of fangirls who insisted on changing into costume before coming to help. No wonder he’s literally the butt of their jokes, they have no substance at all. 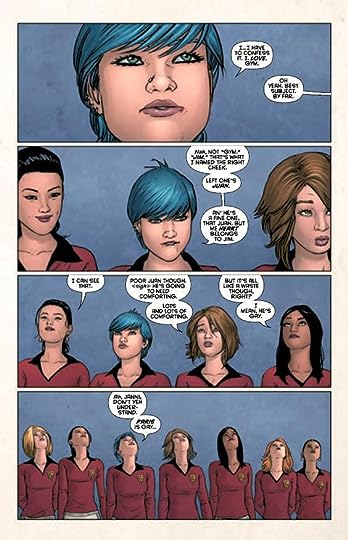 Helena somehow avoids complete cardiac arrest and turns up in time to shoot a gloating Minos. Only it turns out that was a robot clone, as Minos cheerfully reveals to the mysterious lady he is chatting to in a cafe. Now that he’s convinced everyone he’s dead (where have I seen this plot before?) all he has to do is reveal every superhero’s secret identity. The philosophy is that the world doesn’t need saviors that lie to the populace, because we would all rather be dead than lied to. Mysterious lady aka Agent Zero puts that highly intellectual line of reasoning to an end by shooting the actual Minos and sparing us a great deal of pain later. We never learn who Minos is.

In summary:: As Agent Zero said – “Honestly, Mister…whatever…do you really think I care?”. Aptly put, DC, you summed up my feelings about this volume.

Overall, a volume that could have been a lot better but failed because it had ambitious aims that wouldn’t fit in the scale of a spy story. My biggest complaint remains, that between all the Midnighter angst and the Helena angst, there was no time for Grayson. Also, did they just retcon the previous Helena Bertinelli and this one took her place? How does that work?
Never mind, I just remembered that DC Rebirth is happening.