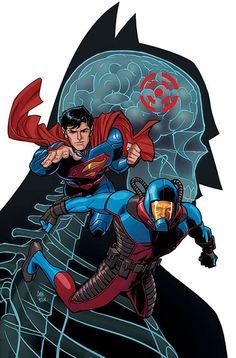 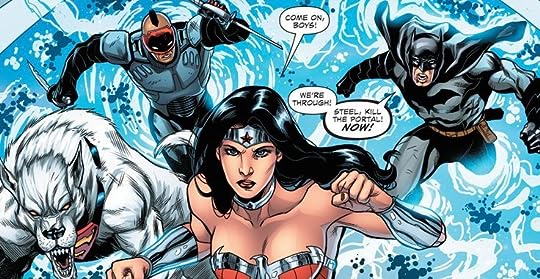 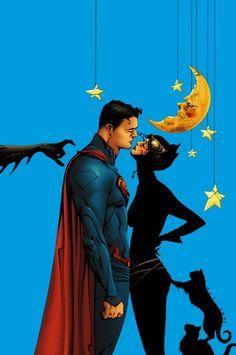 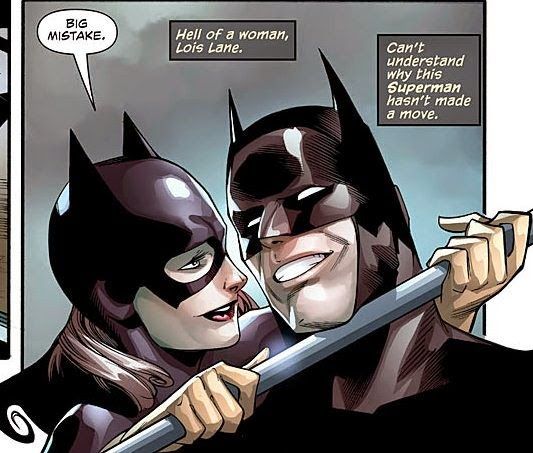 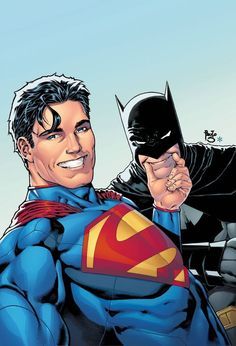 It’s official. The First Born has earned a permanent place among the most depraved villains the DCU has to offer. He is just a one fucked-up, twisted son of a bitch. Cassandra finally gets what’s coming in this one. I almost felt bad for her. What is it with all the eating each other? And I don’t mean that in the fun way. F.B. follows up by remaking Olympus to his liking and then starts his crusade to destroy the remaining Greek pantheon. Wouldn’t wanna be’em. And come on dude, she’s your half-fuckin-sister.

END_OF_DOCUMENT_TOKEN_TO_BE_REPLACED

The Flash, Vol. 6: Out of Time by Robert Venditti

Fast-paced & action-packed!
Unfortunately, I have no idea what just happened…

Warning: Here Be Spoilers!
Ok, I’m going to try not to spoil everything in the story for you, but I’m not making any guarantees. Add in the fact that I’m actually not quite sure what happened in this volume, and I think you’re probably safe.

Time-travel stories like this are where Flash loses a lot of mainstream fans. I personally think, when used sparingly, time-travel can be a great plot device for characters like this one. They can be fun!

Did you hear me, DC? SPARINGLY.

You can use it to correct stories that were totally FUBAR from the get-go, or fix shit that idiot writers may have fucked up. You can also use it to reboot your entire universe, and give everything a glossy new make-over…
Sparingly.
But just because you have a character who can time-travel, doesn’t mean they should. I mean, at some point, it makes the stories you’re telling mean nothing, because the readers just assume that none of it is written in stone. We’re already dealing with Lazarus pits, magic, and alien tech that can all resurrect the dead. So we’re used to the Surprise! It was really my evil twin that died! sort of soap opera mentality that comes with reading comic books. But to have years worth of continuity wiped out by a single issue?
Sparingly, please…

So, who’s the man in blue?
Well, it’s Future Flash, of course. He’s racing through time to fix shit. Again. Only this time he’s a bit unhinged.
Something happened when Reverse Flash (Daniel West) plowed through the timeline a while back. In our time, Barry is noticing that he is (still don’t understand this totally) losing time when he starts speeding from one place to another.
But wouldn’t he just sort of make up the time he’s losing, since he’s gong faster than normal, you ask?
Shhhh!
Barry is losing time!
So the entire volume is filled with our Barry here in the present, plus future Barry going steadily backward in time. Our Barry is still trying to deal with the aftermath of the Crime Syndicate thing, his relationship with not Iris Patty, and a new version of Wally.
Meanwhile, future Flash is making stops all along the timeline, to fix all the things he couldn’t the first time around.

Ok, in my effort not to spoil everything, I can only say that ‘characters’ die, get saved, get powers, go back in time, and die…again.
Or do they?
Are they still alive in this this timeline, but with a changed future? Will they still get powers, or was that a one-time thing caused by future Flash? Is the timeline safe? Did anything really change?
And the soap opera goes on…

In the end, I can’t say it was a bad story. Great pacing, lovely art, and characters that I really like.
It’s just the fucking time-travel that rakes my nerves.
For the love of God…SPARINGLY!

Thanks to NetGalley & the publishers for a digital review copy.

I prefaced my last Wonder Woman review with one for the guys. Well ladies, it your turn. It took me a half a roll of duct tape to pull off the tuck under necessary to sport this outfit. Enjoy.

Azzarello’s finally starting to bring all the pieces together with this volume. In addition to the Wonder Woman issues featured, this one also reprints Wonder Woman 23.2 First Born. It’s an even more detailed origin for the guy that’s been kicking everybody’s ass over the past 2 volumes. Not sure it was really necessary, but I appreciated that it’s been included here. Certainly explains in more detail why he’s so fucked up. I think this guy had sex with a hyena.
END_OF_DOCUMENT_TOKEN_TO_BE_REPLACED

Linda Carter. The one and only Wonder Woman. Also responsible for the repeated laundering of my bed sheets in the early 80’s. Couldn’t get through another review without at least one gif of the first woman I ever loved. So how about the book?

Diana and her crew have finally come together like one big happy family. At least until she threatens to rip Orion’s nuts off. I’m wondering if the kids can pull it together long enough to face off against the First Born and have them all make it out in one piece. The gods continue to conspire against one another high atop the Mt. Olympus office building while sunning and sipping wine like a bunch of mob wives. It’s still up in the air as to where any of their loyalties lie.
END_OF_DOCUMENT_TOKEN_TO_BE_REPLACED

Iron is Azzarello’s 3rd Wonder Woman collection and I haven’t been disappointed yet. This Volume starts out with a nifty little throw-back issue that’s half tribute to early Wonder Woman comics and half a recounting of Diana’s history with the Greek god, War. When I first opened this issue I was skeptical, not being a fan of old school comics, but don’t let that first impression fool you, it fits right in with the rest of Azzarello’s previous stuff.

END_OF_DOCUMENT_TOKEN_TO_BE_REPLACED

Azzarello’s Guts picks up right where Blood left off without missing a beat. Brian continues to mix it up by stirring in even more Greek mythology with Diana’s origin. This one starts out with Wonder Woman meeting up with Hephaestus “The Smith”. Really dig this guy. Diana comes to him for some help preparing for her road trip to the Realm of Hades. She also has a surprise in store for her when she discovers a little secret about home sweet home, Paradise Island. And this one shocks the hell outta her.

END_OF_DOCUMENT_TOKEN_TO_BE_REPLACED

Secret Avengers, Vol. 1: Let’s Have a Problem by Ales Kot

Yep, yep, yep! This was very cool!
Not sure why I haven’t heard much about this one, but it’s really good. It’s got the same vibe as Hawkeye, but the premise is like a toned down version of the X-force for Avengers…if that even makes sense.

Maria Hill has decided to put together a Top Secret group of heroes to take on Top Secret threats. Nick Fury, Phil Coulson, Black Widow, Spider-Woman, and (unbeknownst to everyone on the team) M.O.D.O.K. make up the team.

Oh, and Hawkeye ends up accidentally making the roster.
He’s the Problem that the title refers to.

Let’s Have a Problem was just fun to read.
There’s a rampaging Death-machine (ironically called Fury), satellites falling from the sky (???), a self-aware an bomb (who wants to try gelato), an assassination attempt on Hill (she probably deserved it), and a murder in M.O.D.O.K.’s mad science lab (because…shit happens).

I didn’t realize it until I decided to look this guy up, but Ales Kot was the guy who wrote the only volume of Suicide Squad that I thought was worth a shit. And after reading this, I can say without a doubt I’ll be stalking whatever he decides to do next.
Highly Recommended!

Reviewed this one earlier on in my Goodreads career and I’m currently rereading the Azzarello run so I felt this book deserved a more thoughtful review.

Azzarello’s run grabbed me pretty quick. I really dug how he brought in the Greek gods and went a totally different direction from the rest of the New 52 stuff DC has put out. Brian avoided what I would consider the low road of having Superman, Batman, or any of the other Justice Leaguers drop by just to sell books. I’m actually surprised how many people bought into this version of Diana. Azzarello not only ignored the rest of the DC universe (for the most part), but messes with Wonder Woman’s origin, pours on the violence, and doesn’t have Diana running around in a thong the entire time. Yet he still manages to tie in a healthy portion of Diana’s canon beginning with a return to Paradise Island and her Amazon heritage. Love the way Brian depicts the Amazons as being similar to the Spartans of Miller’s 300. Not necessarily all that original, just fond of that portrayal.
END_OF_DOCUMENT_TOKEN_TO_BE_REPLACED

Velvet is back!
This time around she’s trying to piece together a list of suspects that would have been able to set her up, not only for the recent murder of an agent, but set her husband up as a traitor (and her to take him out) all of those years ago.

Remember the agent who thought he was chasing down a glorified secretary in the first volume? Well, he’s still trying to figure out how to catch her.
And he might finally be realizing that things don’t seem to be adding up when it comes to Velvet’s actions.

This was great! Brubaker shines when he writes these sort of stories!
The best part (to me), though, was Velvet herself.
Thank you, thank you, thank you for making a female character that’s kick-ass, smart, tough, and sexy…without making her into a skanky boob monster in high heels.
Yeah, that sounds like a no-brainer, but (evidently) it’s not.

If you haven’t had the chance to read this one, make sure you keep your eyes open for it. It’s definitely worth a read!

Thanks to NetGalley & the publisher for giving me a digital copy to review.