Not all of the stories were stellar, but overall I liked Gothtopia.
Gordon gets his turn to tell his Zero Year story, and it’s one of the better issues in this thing. If you don’t feel like reading the whole volume, I’d still say check that one issue out. Very nicely done! 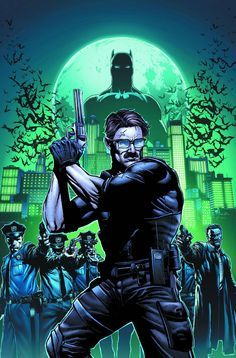 The Man-Bat story is utterly forgettable. Kurt Langstrom has gone off the rails this time around to chase down his crazy ex-wife…Bat-Queen
*bangs head on desk* 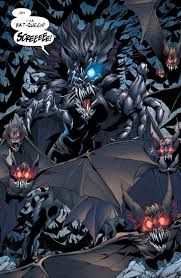 Moving on…
The Gothopia storyline finally gave me the answers to all of the questions I had about Batgirl’s alter ego Bluebell. I know I wasn’t the only one curious to find out why Babs was wearing white and living in Mayberry! 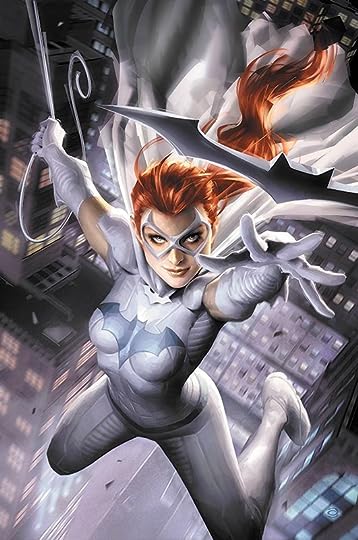 For that alone I was excited to read those issues. Both Batgirl & Birds of Prey had crossovers with this…mysterious event, but you never really found out what exactly was going on.
Well, the bulk of the story happens here, people! And it’s not just Barbara Gordon who’s living an entirely different life… 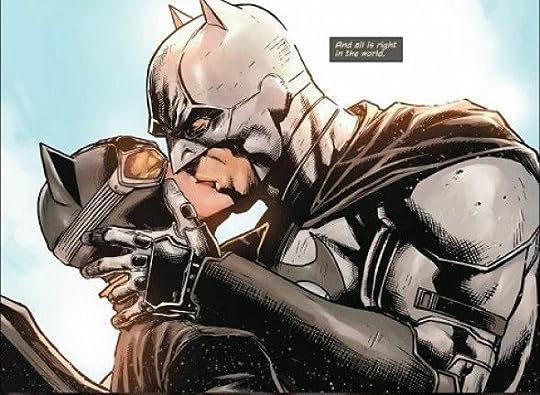 END_OF_DOCUMENT_TOKEN_TO_BE_REPLACED

I would have preferred a long story arc, but dreams don’t always come true. This is a bunch of leftover stories from random times and places.
Yeah, I know… Suck it up, Buttercup!
I will say that they were all consistently good, even if the timelines were all over the map.

It starts off with a prequel to Zero Year that was maybe not necessary, but interesting anyway. It showed Bruce trying to clean up the city before he put on the mask.

Also included was a look at Tim, Jason, Dick, & Barbara’s first peek at the Batsymbol in the sky, which coincided with (varying degrees of) turning points in their lives.

Harper (Bluebird) and her brother Cullen feature in this one twice. The first time Harper is determined to help Batman deal with his rage after Damien’s death.

I’m not sure how much I’m actually enjoying this Death of Damien storyline. It rankles my nerves a bit, and I wish they’d just dip his ass in a Lazarus pit already and be done with it. It’s a personal preference, but I just don’t like watching the writers try to decide how Batman should act while in the throes of grief over his dead child.
There was this story on the news the other day about this woman who lost everything because she started smoking crack. Turns out, her kid had died a few years beforehand. Now, I don’t think smoking crack is a good idea under any circumstances, but she gets a pass in my book. If there was ever one excuse to be a crackhead, that’s the one.
My point is, I just don’t enjoy the dead kid angle. I believe the writers are trying to convey Bruce’s deep emotions, but (to me) it feels hollow and cheap.
And the longer it drags out, the more annoyed I get.

Love this piece of art, though.

In the issue called Ghost Lights, Superman pops in to check on Bruce, and they end up taking on an evil spirit who has been summoned by some stupid kids.

I enjoyed the Superman/Batman team-up. Always nice to see those two together!

Clayface shows up in this sucker and makes quite an impression. Snyder played up how dangerous a villain he could be if he totally went off the rails.
I thoroughly enjoyed this story!

The story set in Arkham with the character
Anchoress
was a bit of an iffy one for me. It was different enough to keep me interested, though.
It’s basically a tale about a not-bad-but-bad-anyway nutter in the loony bin.

Creepy serial killer tale ahead! Unless it somehow plays into the Joker mythos, this one is a throwaway. Again, not bad storytelling, but I’m burned out on the subject matter. I simply prefer Batman to take on ‘villains’ and not real-life psychos.
*shrugs*

The last one is a tie-in with the Batman Eternal stuff.
Spoiler below!

Big thanks to NetGalley and the publisher for giving me a digital copy to read and review.

Quite a few tie-ins in this volume, if you like that sort of thing.
It starts off with the Zero Year tie-in. Don’t get excited, it’s not like Batman shows up.
It’s about Dick in the pre-Dead Family stage. It just so happens that Haley’s Circus is in town during the Riddler’s takeover of Gotham City. Basically, a stick-by-your-friends-don’t-be-a-cocky-ass kind of story.
Then we fast-forward back to Nightwing and Barbara during her I-don’t-wanna-be-Batgirl crisis.
And there’s a whole Will They? Won’t They? thing, as Dick tries to get Babs to remember the Good Old Days and move with him to Chicago.
Of course, Reasons happen, and Nightwing ends up unpacking his boxes by himself.
Once he’s back, there are a couple of random (but not awful) stories that seem a bit like filler.
As in, Let’s tidy up any loose ends in this thing, guys!
Once the annoying roommates, ex girlfriends, random b-list villain, and Kid-With-Similarly-Tragic-Backstory are all taken care of, we can move on to the final chapter of Setting son.

The Sinister Six unmasked and then (supposedly) killed Nightwing. Obviously not, but that’s what everyone thinks.
Anyway, I’m guessing this is the transition issue where we see Bruce send Dick off to fight as an undercover agent or whatever.
I really like the idea of Grayson as a spy, but this last issue was LAME.
There’s this dumbass fight scene between Bruce and Dick, as Batman tries to see whether or not Nightwing is Too Broken To Do What Needs To Be Done!
Or some such nonsense.
It drags on and on and on, the two of them screaming dorky stuff at each other, blood spurting, masks breaking, fisticuffs flying…

But the main thing is that Nightwing stays ‘dead’, and Dick is off to infiltrate a new Secret Society of Evildoers. They’re a group of Cape-Killers, that no one has ever heard of before now.
First the Court of Owls, and now these guys? Way to shit the bed, Batman!

Overall, this was decent. If you aren’t a huge fan of the character, I don’t see any reason to put this on your must-read list. However, if you are interested in what’s happening/going to happen with Nightwing, then by all means grab Higgins’ run on him. This was a good (enough) ending to make me glad I stayed with it.

I should probably take some time to think about it, since I just finished this one about 3 minutes ago, but…
*shrugs*
Fuck it.

I’m done.
I’m not reading another one of these stupid attempts to merge a shitty comic with an even shittier tv show.
Now Oliver Queen has some mysterious past that’s tied up in a conspiracy about THE ISLAND.
*screams internally*

The first issue is Green Arrow: Zero Year.
As in, what was Ollie up to while Bruce was taking on the Riddler in Gotham.
Shhh. No one will notice that Batman is cooler…promise.

This little adventure leads to Oliver meeting Diggle.
One fist-bump later:
TEAM ARROW!
No, really. I’m not kidding.
I was making little notes to myself when I was reading it, and the next one I have says “I’m going to throw up“.
For reals!

Mooooving on.
The Outsiders War.
Who the fuck are the Outsiders? Well, it’s not a mismatched team of kids lead by Wildcat, that’s for sure.
Not this time, anyway. Nope.
The Outsiders are…tribes. There’s the Shield tribe, the Fist tribe, the Sword tribe, and (of course) the Arrow tribe…just to name a few.
Are you seeing the pattern here?
Anyway, Ollie and Shado are searching THE ISLAND for the Totem of the Arrow, when the Shield tribe attacks them.
With shields.

Oh noes! We can’t shoot them with our arrows, because they’re blocking us with their shields!
Ouch! Now they’re tossing them at us like boomerangs!
Bong!
What the fuck is Captain America doing in the DC universe?
Wacka! Wacka! Wacka!
Let’s see what my notes say, shall we?
“This is retarded.”
Damn, I’m eloquent!

The art is ok, until you try to figure out what’s happening in any of the action panels. Then you might as well make an educated guess, and move the fuck on, because it’s not like you can actually see what the hell is happening.
Part of me liked the whole BIG WORD thing with the action happening inside, and part of me was squinting at the screen getting more and more pissed off. I have a feeling this style will work better in print than digitally, so that may have been part of my issue with it. However, for those of us who read a lot of our comics on tablets, this might pose a problem.

Let’s see what else I have..
Hmmmm. I’ll consult my notes.
“This last little bit doesn’t seem so bad. Wait. No. It sucks again.
Something, something, something. More choppy action scenes.
I hate this. Want it to end. Why is he yelling at a traumatized kid? Gotta stop requesting stuff. Ugh.”

I’ve definitely read worse, but this just didn’t work for me.
Maybe you’ll have better luck with it than I did.

Origin of the Giant Penny!
Ok, maybe nobody else cared, but I thought it was cool of Snyder to give that massive Penny that Bruce keeps in the Batcave, a fresh start.
Dear Mr. Snyder,
Could you do the Dinosaur next?
Sincerely,
Anne

This is the second arc of Zero Year, which is Snyder’s New 52 origin story for Batman.
It’s not as dark as some of the previous origins, but it’s not exactly light and fluffy, either.
This is a younger version of the Dark Knight. He’s fallible, relatively inexperienced as Batman, and more mouthy than what we’re used to seeing.
He sort of reminds me of Dick Grayson, with the snappy comebacks during fight scenes, you know?
Did I just say Snappy?
Holy shit. I did.
Did you know, that every time someone uses snappy in a sentence…
Somewhere an angel gets his AARP card?
That’s deep, man. DEEP.

Anyhoo. Edward Nigma (last seen abandoning Wayne Industries) has returned as a full-fledged super villain.
The Riddler!
He’s planning on taking Gotham hostage, and cleansing the earth, so to speak.
Can Batman unravel the clues fast enough to stop him?
Surprisingly…not at first.
Butbutbutbutbut, you say. He’s the goddamn Batman!
Yeah, not so much. Or at least, not quite yet.
Butbutbutbutbut, you say. Batman is too well-prepared to be caught unawares!
Yeah, but nobody is born with Bruce Wayne’s level of paranoia. That sort of thing is learned.
I mean, unless you’re schizophrenic, of course.
So, I’m thinking that by showing Batman pull an epic fail, Snyder is giving us a solid reason for his wildly detailed contingency plans.
And also the Penny. Because, really, that was a highlight for me.

There were a couple of scenes I raised my eyebrow at, but, on the whole, this was another solid Snyder/Capullo team-up.
And if you’re not reading this title, then you need to turn in you Cool Kid card.
Seriously.