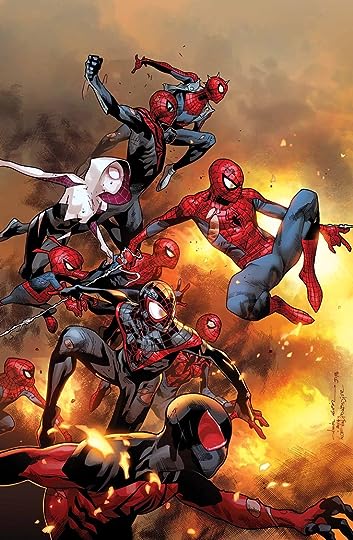 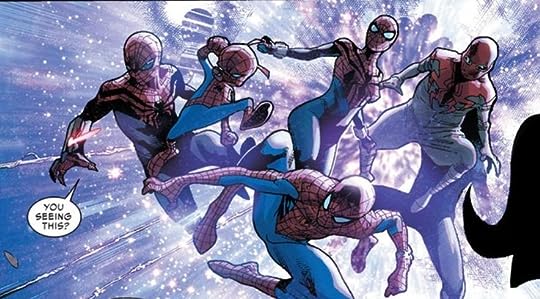 The gist is that there is this family called the Inheritors who live on (I think!) Loomworld. 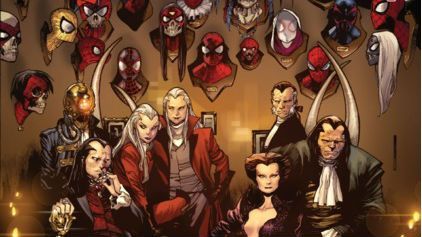 Anyway, this is the volume where it all comes together! The final battle between the Inheritors & basically every Spider in the multiverse!
Boom! Pow! Sock! Ka-blam-o! 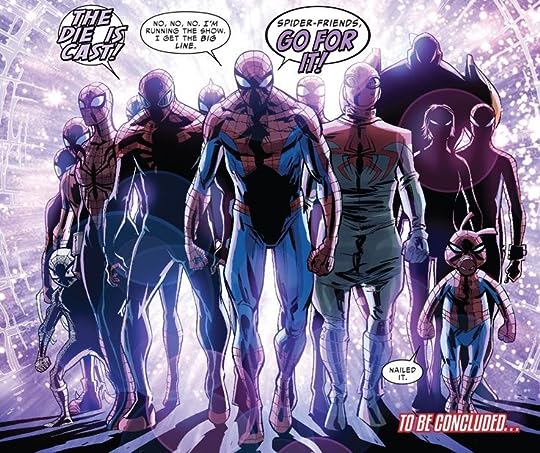 Yeah, yeah…sounds goofy, but there really are some awesome moments in this thing!
Including a showdown between Otto and Peter, as the Superior Spider-man tries to prove he’s got what it takes to lead in the future. 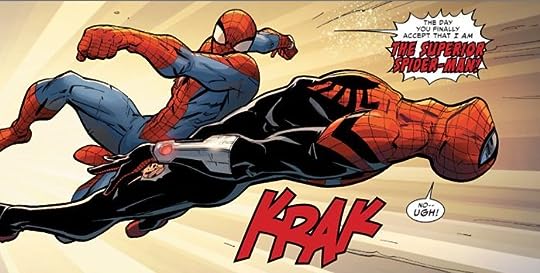 This is the conclusion of Doc Ock’s time as Spider-man, so fans of that title may want to read this in order to get one last glimpse of him.
sniffle 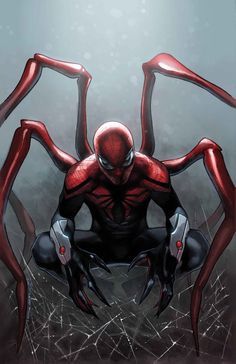 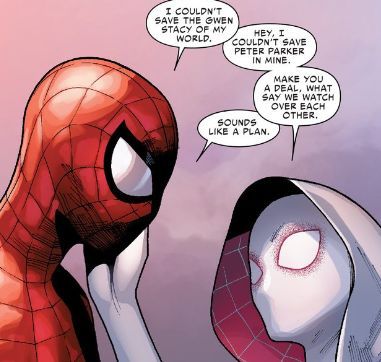 Everyone’s favorite Ultimate Spider-man, Miles Morales, shows up, too! Among other things, he takes a trip to (what appears to be) the Cartoon Universe.
Dawwww! How cute! 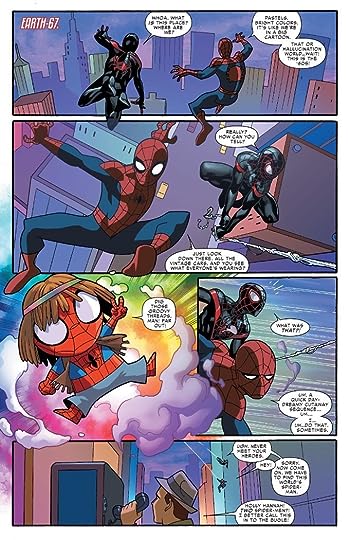 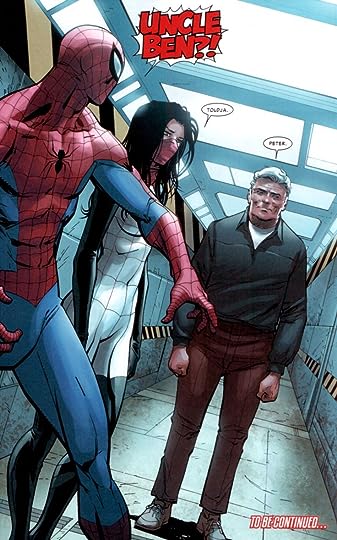 I don’t want to spoil how it all goes down, but there were plenty of things about it that made this one a great load of fun to read. At least, it was for me.
And visually? It was Amazing<–of course! 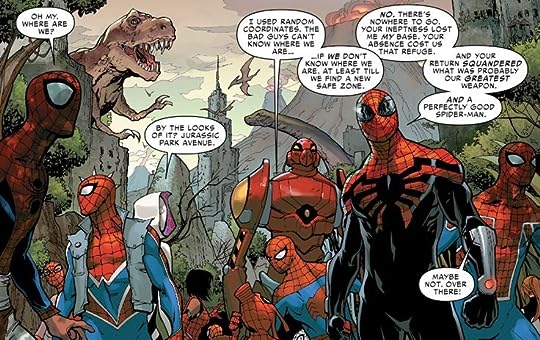 Now, if your aren’t into Spidey, then this may not be for you. It could be very confusing for someone who isn’t familiar with any of these characters, so I’m definitely not recommending this as a jumping-off point for any newbies. I honestly think it would be overwhelming unless you’re somewhat familiar with these characters. 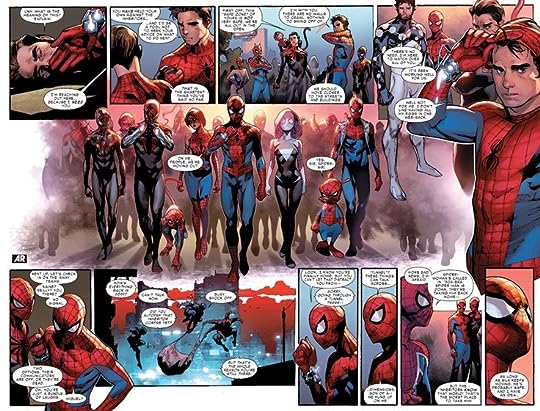 However, if you do know a bit about these guys? Yeah, go for it! Spider-verse was highly entertaining, so I’d easily recommend it for hardcore fans. 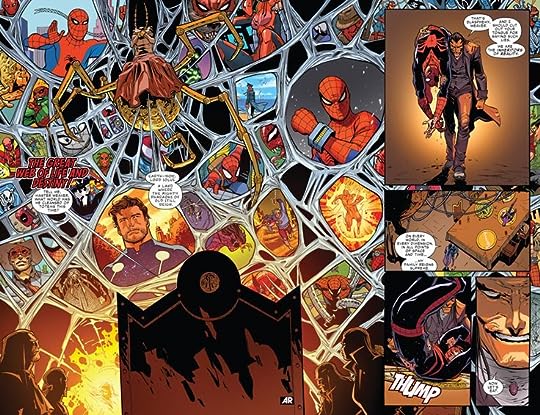 Ehhh. It’s ok.
I wasn’t expecting perfection, though, so that probably helped. 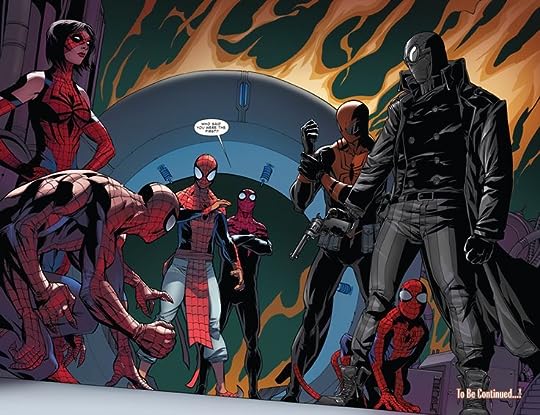 This is (duh) the prelude to the Spider-Verse event, and I’m determined to finish at least one of Marvel’s mother fucking events this year. And, honestly, this might be the only one I actually get to, because… Well, because! 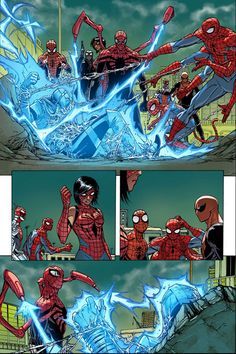 Also, I love Spider-man, and all things Spider-related!
Plus, Dr. Octopus! Yes, Otto shows up in this one!
How, you ask?
Well, remember that time he got blown upish, but then he somehow miraculously showed up alive?
*nods head*
Ok! This is what happened when he sorta-kinda disappeared/blew up!
He actually time traveled into the future. 2099, to be exact! 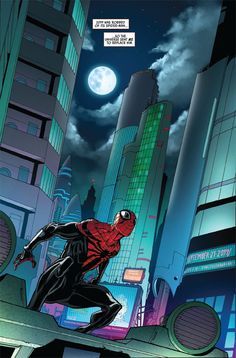 I see you nerds in the back getting all excited!
Yes, 2099 is where when Miguel O’Hara (view spoiler)[otherwise known as Spider-man 2099. I know, that’s sort of a letdown for a spoiler, right? (hide spoiler)] is from, and since he is currently (as far as this comic is concerned) in our timeline, the universe tried to correct itself; hence, Otto ends up in the future!
I’ve always wanted to use hence in a sentence…*squee* 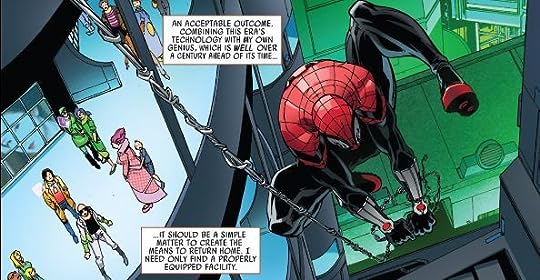 Anyway, Otto (sort of) figures out what is happening with these Spider Hunters, and starts collecting Spiders from all over the multiverse to help him fight. 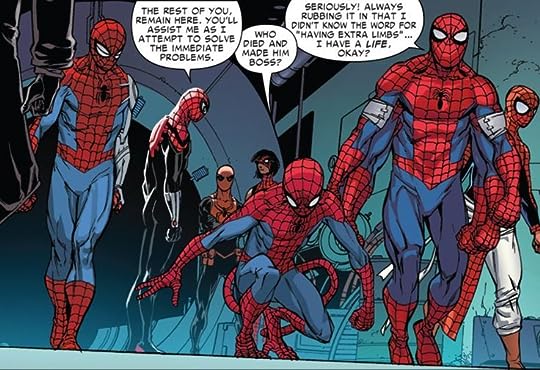 There’s more to this than just Otto, though. Peter has a team-up with Ms. Marvel that ushers in his first glimpse of what’s happening to the Spider-verse. It’s cute. Nothing amazing, but fans of Kamala will be excited to see her meet Spidey. 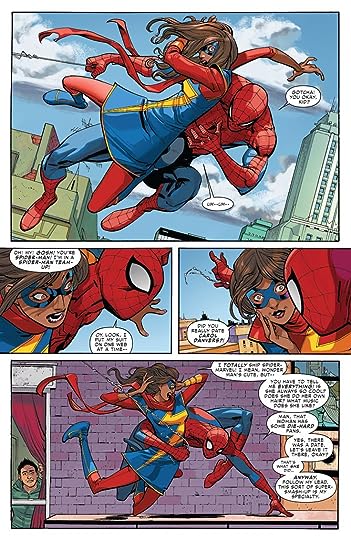 Add to that some extra stories from the other Spider-men, and it isn’t a bad collection. 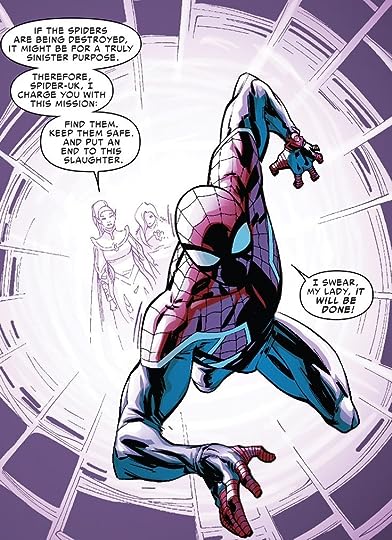 I’d probably only recommend this one to people who want to read the Spider-Verse event, though, because I’m not sure this would be a good stand-alone volume for casual fans.