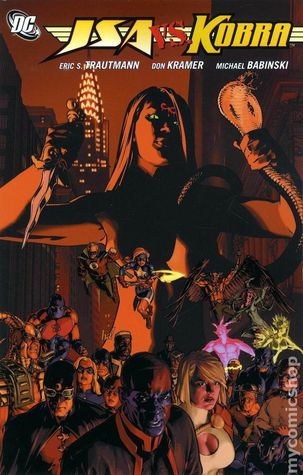 The JSA (Justice Society of America) isn’t the Justice League of America but it’s a team that blends really old superheroes with the new.  It’s nice that old guys like Green Lantern Alan Scott and the original Flash, Jay Garrick have something better to do than be greeters at Walmart.  The leadership is divided between brain box, Mr. Terrific and my imaginary superhero girlfriend, Power Girl, the leader in the field.

It seems that Kobra, an international terrorist organization are everywhere, including infiltrating Checkmate (sort of DC’s version of SHIELD) all to bring about Kali Yuga (an age of chaos) and Jason Burr, the crazy leader doesn’t care how who gets caught in the cross fire.  So it’s the JSA (let’s assume the Justice League were in space fighting Darkseid or something) who have the task of smacking around some terrorist goons and saving the day.

This is a nice mix of conspiracy, puzzle solving and kicking ass Power Girl style.