The Joker: Endgame by James Tynion IV
My rating: 2 of 5 stars

Thanks, DC!
So nice of you to reprint Batman: Endgame, plus in a few tie-in issues, and sell it as a completely different book.
Way to be classy!

The tie-in stories aren’t bad, but they’re mostly about random characters…and then Batgirl.
Considering how much I disliked the New Batgirl, I was shocked that it was my favorite out of the bunch. It was told without dialogue, which worked really well for me, because I absolutely LOVE the art from that title. 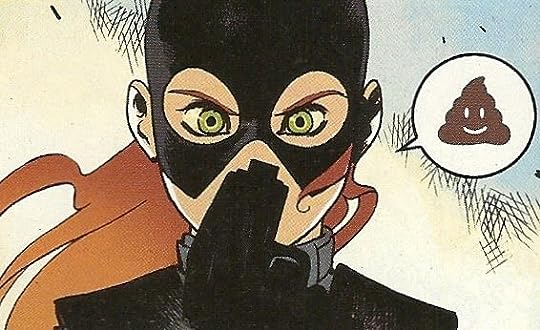 The rest of the tie-ins deal with what’s going on for different characters during the Endgame crisis. There’s one nutty set of stories that are all connected, dealing with a doctor at Arkham and some of her loony patients. The Big Reveal at the end of that one left me cold, because I already knew who Eric Border was, and (bonus!) I don’t tend to like tales told through the eyes of arbitrary characters.
I was actually hoping for the Joker’s point of view, because…well, the title says something to that effect. Sadly, no.
I’ve got a better title – The Joke’s on You: We Got Yer Money!

If you haven’t read Endgame, maybe this would be the way to go? Especially if you’re interesting in purchasing. However, if you have read it (or own it), then this probably isn’t going to impress you all that much. Of course, lots of people loved this arc, so…

For me, this was a struggle to get through. I was so annoyed that they expected me to re-read the same shit over again that it took me forever to finish it. And, yes, I read the entire thing.
I kept hoping reading Snyder’s Endgame for a second time might help me see it with fresh eyes (or some other nonsense), and maybe I’d find something I missed that would make me enjoy it a bit more.
NOPE. Still thought it was a turd.

I received a digital copy from NetGalley and the publisher.