Believe the hype. The Sixth Gun is even better than I hoped it’d be. I devoured this collection in one sitting and immediately regretted not having the 2nd one on hand to dig into.

Cullen Bunn and Brian Hurtt have partner’d up for a tall tale that’s part western, part horror, and all together one helluva good time. The first half of this edition collects Vol. 1: Cold Dead Fingers. A terrific introduction to Bunn’s warped vision of the Wild West. General Hume, one of the most notorious General’s from the Confederate Army, is back from the dead and is lookin’ to take back that which he sees as rightfully his. The last of the Six Guns. Supernatural side-arms capable of much more than just spittin’ lead. And he hasn’t come alone. Really dug Bunn’s spin on the 4 Horsemen as Hume’s men. 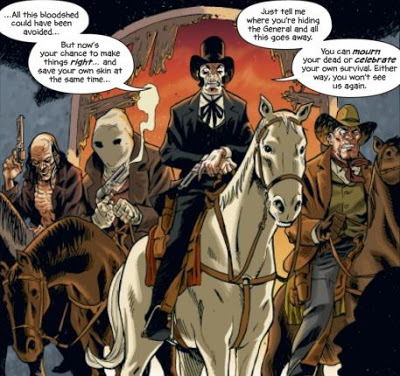 Of course, it’s not gonna to be that easy. The Sixth Gun has come into the possession of a preacher’s daughter by the name Becky Montcrief and she’s not giving up her father’s side arm without a fight. Becky’s taken up with a cagey gun-fighter by the name of Drake Sinclair who brings his own set of shady motives to the table. Cullen’s characters really took root for me in this book. He did a fantastic job giving them just enough depth to leave me hankerin’ for more. 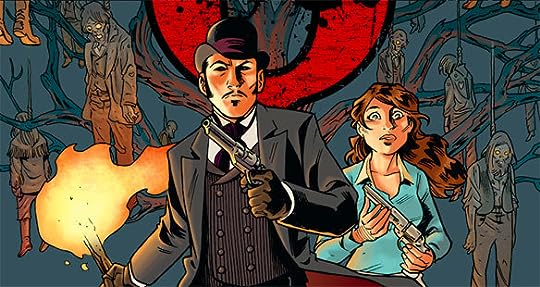 This all culminates in a showdown at Hume’s old P.O.W. camp, The Maw. Perfect back drop for the climax of the story. I promise you there’s much more to this one than the little bit I’ve highlighted. Bunn is clearly laying the groundwork for what is going to be a much longer epic. 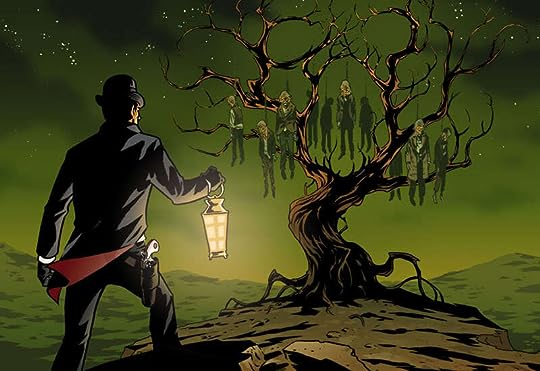 The second half of this book picks right up and collects the next arc, Vol. 2: Crossroads. This one’s set in the city of New Orleans and certainly nails that voodoo feel. Bunn continues to flesh out the characters that survived the first arc and adds a few new ones to the bunch. Kirby Hale being my favorite. There’s certainly more to this straight-edge cowboy than meets the eye. And that shit in the bayou was killer. 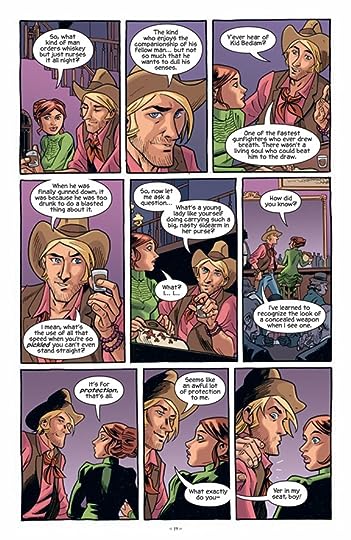 Hurtt’s artwork was probably the main reason I waited so long to pick this one up. Not a lot of detail to be found and it isn’t incredibly unique. Sorta simple really. That said, much like my misguided initial impressions of the artwork of several other series I’ve ultimately grown to love, he made quick work of winning me over with this one. Brian proved by the end of this book that he has the chops to pull off both the western and horror vibe Bunn’s story requires. 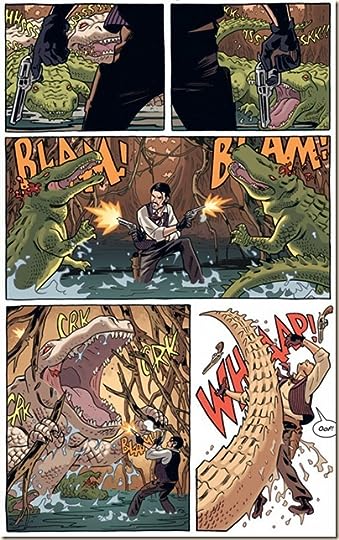 Loved this oversized hardcover by the way. A buncha cool little extras crammed into the back including sketches, promotional artwork, and a pretty killer short story. Fans of westerns, Hellboy, BPRD or other horror hybrids will likely find themselves enjoying Bunn and Hurtt’s The Sixth Gun as much as I did.

Mars Attacks, Volume 1: Attack from Space by John Layman
My rating: 3 of 5 stars

Anything other than just mildly entertaining? Yes, but not amazingly so. However, it was a nice change of pace from Tights and Capes.