Arkham Manor, Vol. 1 by Gerry Duggan
My rating: 3 of 5 stars

So, part of me thought this was pretty cool, and part of me felt meh about the whole weird Arkham-Is-Wayne-Manor thing.
For those of you who don’t know, this debacle is due to the goings-on that happened at the end of the second volume of Batman Eternal.
{Spoilery shit happened}
And now Wayne Manor belongs to the city of Gotham.
Aaaaaand…they’ve turned it into the new Arkham Asylum. 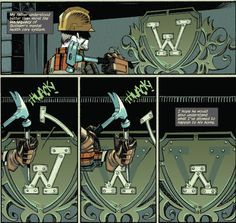 Also the art. The crouching, slinking, leaping, cartoony Batman was somewhat jarring. But, then again, somewhat cool!
I can’t decide. 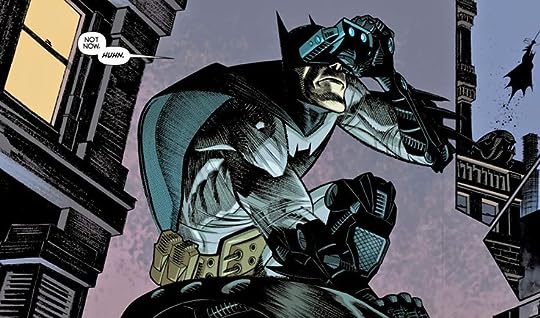 This is a straight-up Batman plays detective story, and I liked that it was pretty much self-contained.
Krazy Killers, Killing Krazies!
Go, scruffy-faced Batman! Go! 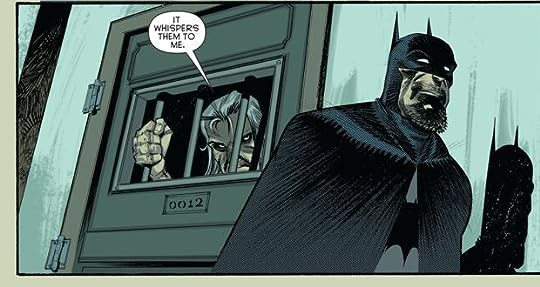 Yeah, so as the title implies, everything happens at Arkham/Wayne Manor. Bruce is now living in a townhouse with Alfred, and driving back and forth to the Batcave.
That’s got to be one hell of a depressing commute, you know? 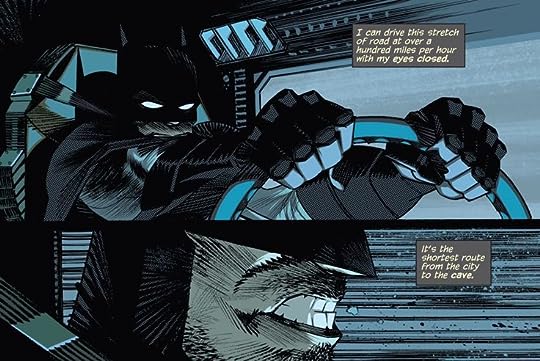 As soon as the inmates move in, the bodies start piling up. And it’s up to Batman to stop the killer from striking again! 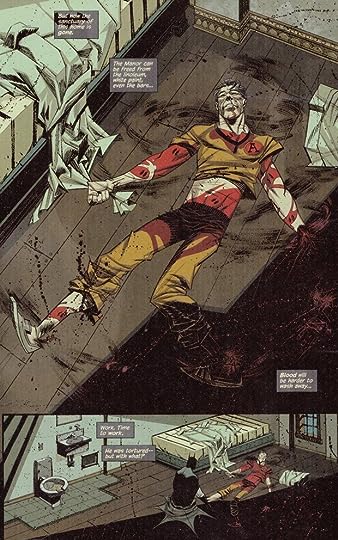 Because…
Well, let’s be honest, the cops could probably care less if some wacko is offing dangerous criminals, right? I mean, I certainly wouldn’t if I were them. No hard feelings, Bullock. I woulda made the same call, buddy. 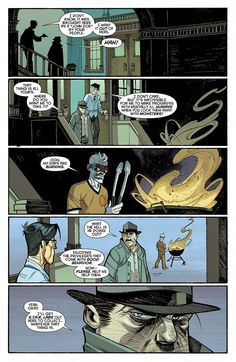 Anyway. Dead inmates!
Batman goes undercover as a newly incarcerated fellow by the name of Jack Shaw. Shaw is…basically Bruce in a mustache. Kinda like Matches Malone. He attends group meetings, uncovers secrets, and attempts to ferret out the bad guy. 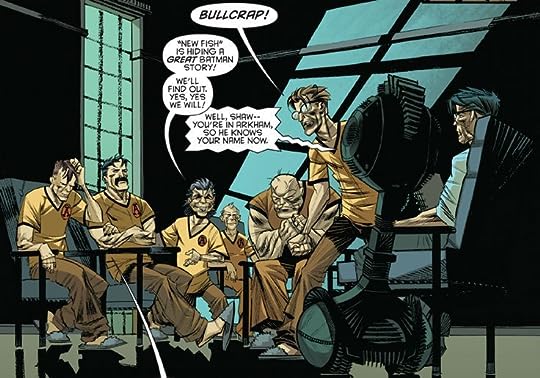 Of course, at some point, he has to drop his Shaw disguise, in order to move about more freely. His new disguise?
Shaw in a white uniform!
Clever bastard. No wonder he’s The Batman! 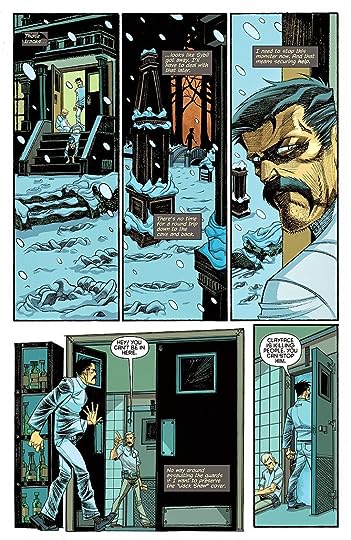 Whatever. His lame disguises aside, this wasn’t a bad Batman mystery. And since it is a spin-off of the Batman Eternal storyline, those of you following the Batverse carefully may want to pick this up.
If nothing else, someone makes a reappearance towards the end of this, and I’m kinda interested to see where he pops up next. 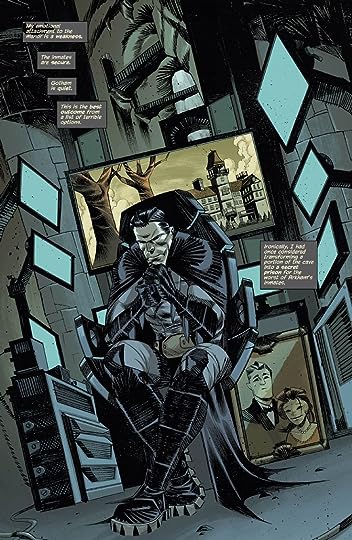 Alrighty, I feel the need to pick on a few of these panels of artwork. They’re not bad, per say, but they made me giggle.

That mouth! Daaamn!
Does anyone else think those are some pretty jacked up teeth for a rich playboy? They’re all different lengths, and some of those fangs aren’t even canines. Plus, that one front tooth is veering dangerously close to Tom Cruise territory…
Mesmerizing! The more I stare, the more I can’t stop staring! 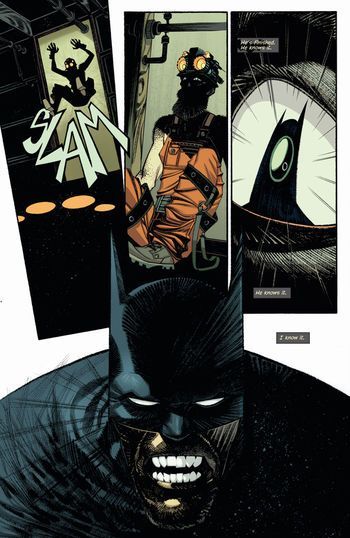 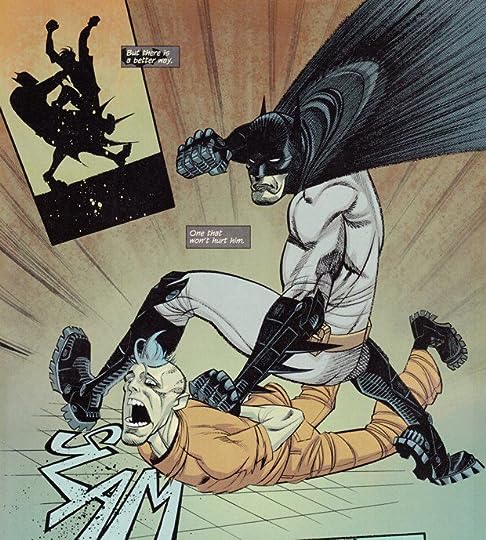 Awww. Wook at his widdle fists!
Those arms couldn’t be drawn more awkwardly if the artist did it on purpose. Am I the only one who thinks they look weird as fuck? Is he getting ready to break into the Chicken Dance? And his delicate ankle tapering off into that huge-ass foot? LMAO! 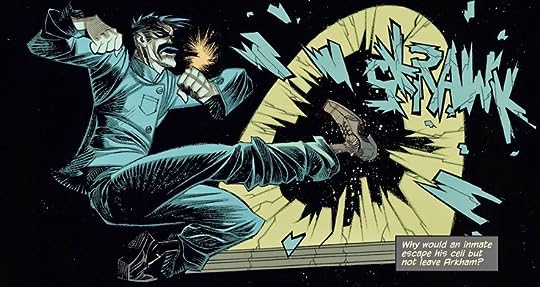 Anyway, I didn’t think it was horrible, but it probably wasn’t needed, either. It seems like there are a ton of Batman titles right now, and this one (while definitely readable) will probably fall into obscurity pretty quickly.

I received a digital copy from NetGalley & the publisher.

For pure high octane fun Batman Eternal packs a pretty good punch. Plenty of crazy storylines weaving in and out, plenty of insane villains wreaking havoc, and plenty of the Bat-family heroes taking a stand against evil.

It wasn’t until the very last page of this volume that I sort of took a step back and went..
The FUCK is this shit!?

I’m not saying that this was bad, or that I didn’t enjoy it, but I was pretty annoyed with the ending of this one. And, yeah, I know it’s not The End, but…
Hmmm. I don’t think I’m saying this right. I guess what’s bothering me is that I just felt like I’d already read this story somewhere before. Did this feel regurgitated to anyone else? Anyone?
I mean, first of all, Hush is the Secret Villain behind a far-reaching conspiracy…
I know that’s been done before.
Is concocting needlessly elaborate schemes now considered Tommy Elliot’s superpower? Is it?! 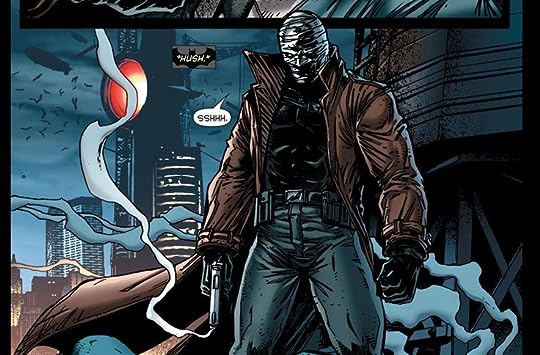 Ok. And, second…
I’m not sure if Bruce has ever lost control of Wayne Enterprises before, but plenty of other superheroes have lost their companies, so (combined with Hush’s wash-rinse-repeat storyline) it didn’t feel like it was anything new or fresh.
After I finished, I felt a bit like a deflated balloon.
That’s it?

BUT.
Before I got to the end, I was really entertained with all of the different threads of this volume.

Stephanie Brown’s Spoiler comeback was quite a lot of fun to read about. I’m not saying that there weren’t holes in this plot, but it was entertaining, nonetheless. 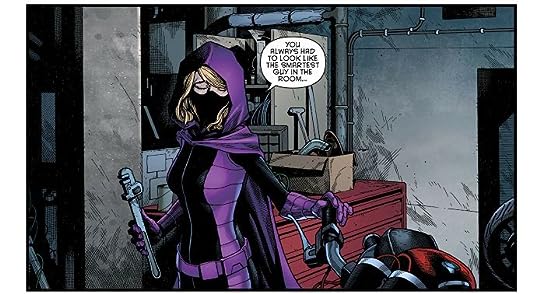 And Catwoman! There can never be enough Catwoman in a Batman title, as far as I’m concerned. I love to watch these two do their little dance… 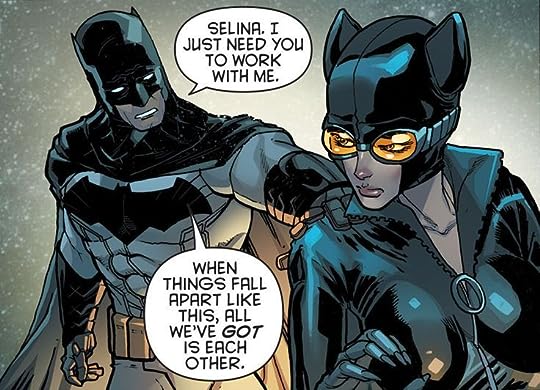 Most of you already know that what happens –> here Crime lord? Am I saying that right? It sounds so cheesy…
Anyway, bad stuff happens to an innocent ‘someone‘ in this volume, and Selina decides that instead of trying to take the bad guys out, she should just take them over. There was a preview of her new title in the back of my copy, and it looks kinda cool. 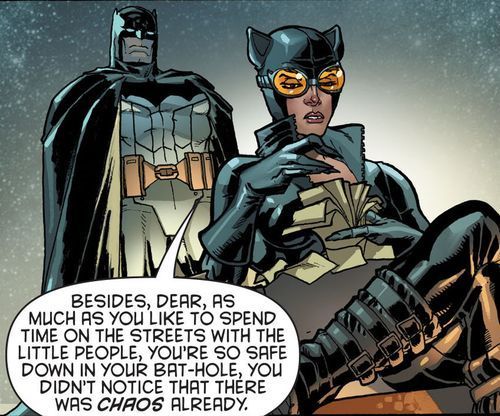 Alfred & his daughter both play a big role here.
Al gets jacked up by Hush, and his daughter finds out that he was keeping a few secrets from her… 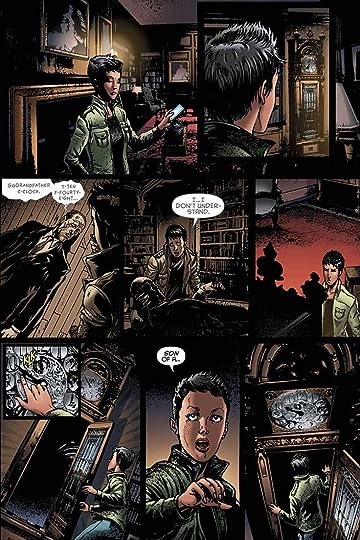 After a meet-cute with Batman, she reluctantly takes over as Penny-Two and becomes Bruce’s eyes and ears in the Batcave.
Also, Alfred gets to kick some undead ass with Bane in Arkham Asylum!
Shhh. Go with it… 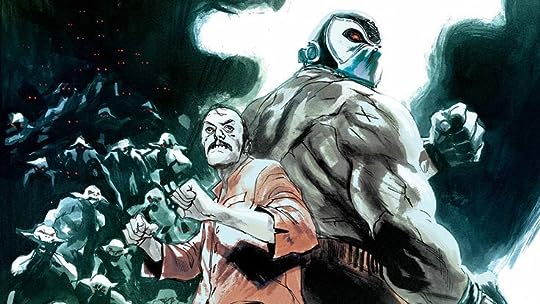 Lots of other stuff happening, as well. Batwing & Spectre get dibs on the paranormal angle, Batgirl & Red Hood do a little angry team-up, and Harper & Red Robin are getting closer to finding {insert random evil dude}.
It’s a Bat-family reunion! 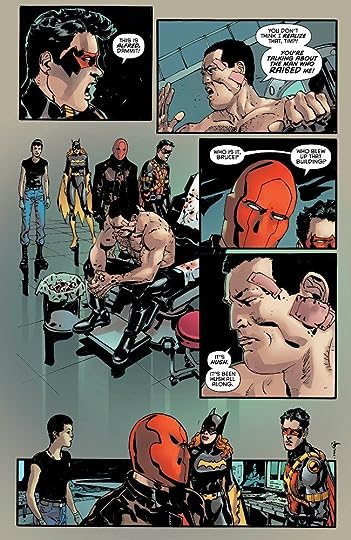 Well, not everyone shows up, of course.
Grayson is still playing dead/James Bonding it up over at Spyral, and Jim Gordon is still rotting in jail. Speaking of Gordon, his former protege, Bard, is still running around fucking up Gotham’s infrastructure as per Eliot’s instructions.
I was actually kinda hoping Barbara would have dropped him off that roof. 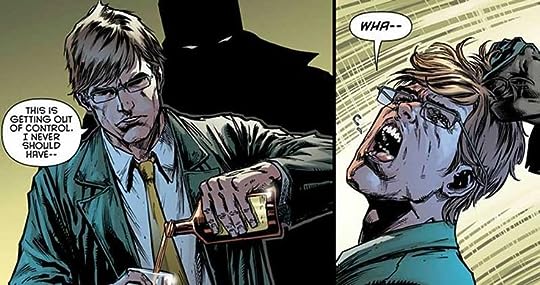 Ok. I think overall this was fun, even if it was a bit unwieldy. Sure, some of it feels like old food that was scraped off and re-plated, but certain foods re-heat well enough. Volume 2 wasn’t as good as next day pizza, but it’s also not a total loss…like leftover nachos.
It seems like some important things are happening in this title that are going to affect the Batverse, so if you’re interested in keeping up with the current goings-on, this is probably a must-read. However, it’s super readable, especially if you’re willing to overlook a few of the nuttier aspects.

Thanks to NetGalley & the publisher for a digital review copy.