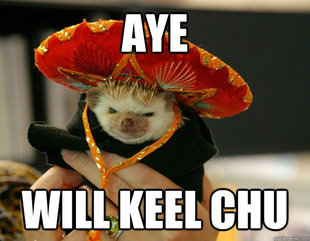 Okay, so maybe that wasn’t the best analogy.

I don’t really understand why Nimona is an award-winning, supposedly ground-breaking book, because it doesn’t do anything new?

The plot follows a shape-shifter girl called Nimona, who appoints herself as sidekick to a half-heartedly evil genius, Ballister Blackheart. Together they conspire to bring trouble to the Institution of Law Enforcement and its poster boy, Sir Ambrosius, who also happens to be Blackheart’s arch-nemesis. Only, Nimona wants to stampede everything, Blackheart has a rule about not killing people and Ambrosius is questionable. And the Institution is conducting secret experiments that endanger the city. 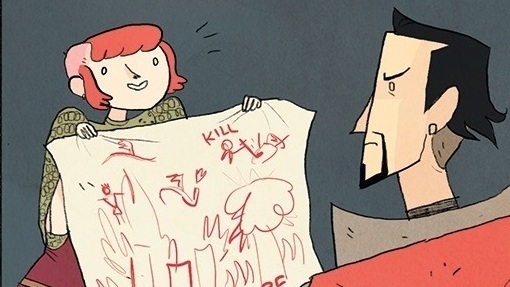 The first bit is just Nimona and Blackheart discussing their respective ideas of villany, with BB’s plans going haywire because Nimona runs amok. After that the truth about the Institution comes out and BB sets into motion plans to expose the villany of the so called good guys. The final part deals with Nimona’s past and why she’s such an OP character, as well as the relationships between characters.

And while it was cute, smile-inducing and a good way to spend the time, I don’t think it was note-worthy in any way.
The villain having a tragic backstory? Check.
The protagonist having a superpower coming from experimentation? Check.
The supposed hero being a sneaky cheat? Check.
The most well-known organisation in the setting being the shadiest? Check.
A plot hinging on a misunderstood protgaonist? Check.
The villain and the hero, both male, in a romantic relationship? Erm…that one’s a bit unusual. But it shouldn’t be, just as strong female characters shouldn’t be a surprise.

The art style is refreshing and strangely detailed, with Nimona rocking a fade sort of hairstyle. Every character, even the ones in the background, is unique and recognizable. Somehow the the medieval world with internet worked. I thought the sequences where she transforms into animals were pretty cool too. 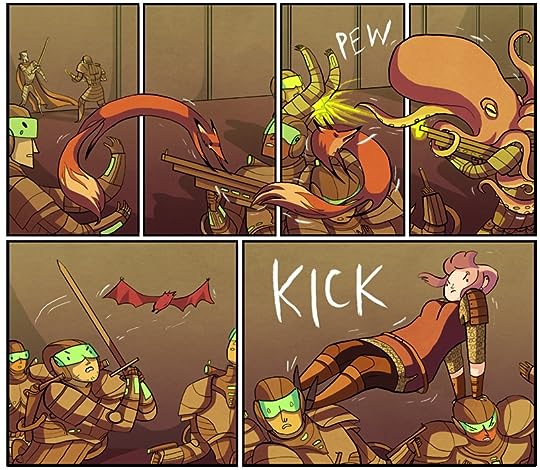 So a tad over-hyped, but definitely enjoyable.

3 thoughts on “Nimona by Noelle Stevenson”