Injustice: Gods Among Us: Year Three, Vol. 1 by Tom Taylor

Am I the only one who wasn’t that impressed with this volume?

To clarify, it wasn’t bad, I just thought it didn’t live up to the first two volumes of the series. Or the last. Not all of it, anyway.

Let’s take Constantine. He’s annoying. Occasionally funny, yes, but overall, kind of irritating. I can’t really say why, but he is. One thing that bothered me was his complete willingness to sacrifice anyone – I get it, but at least blink at the dying person? He seemed to think he would get things done by just barging in wherever and staring people down. Also, I really didn’t like the fact that he had no plan. JC basically ran around like a Pokemon collector without an actual end goal. I do not call “kick Superman where it hurts” a plan. 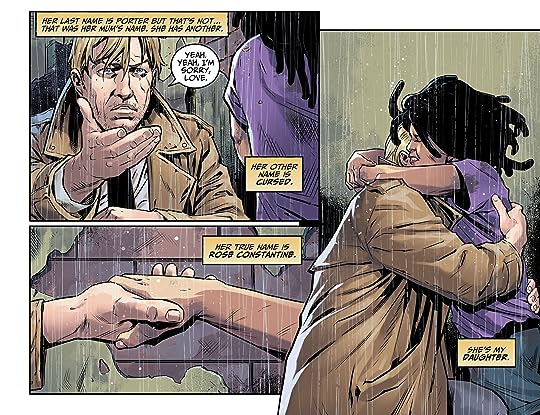 The other was a seemingly naive Batman. Who is this plush toy? Why would Batman have a reaction to anything? So many questions. Including: who is this Spectre dude? I’m hoping some knowledgeable person will tell me why he’s so powerful.

Yellow Superman continues to be as loopy as ever, turning a convenient blind eye to Sinestro’s more…persuasive interrogation tactics. He’s also experiencing the joys of being a paranoid ruler, as he can’t really seem to trust Billy. Or the Spectre. Or anyone really.

The scene in the car sounded like the start of a very interesting joke.
A detective chimp, Batman and a crazed demon contractor walk into a cab…

There were two redeeming features in this volume. Both are major spoilers, so read at own risk.

1. The return of Dick Grayson, or is it Dead Grayson. I don’t know how I feel about this, given how much emotional weight it had in the first volume, but the idea of Grayson as Deadman is certainly intriguing. Also, poor Barbara, wait till she finds out.

2. This one sentence in Superman’s happy dream sequence where he’s happy about having a baby because it’s someone he can hold without breaking them.
(wails heart out) WHY DO YOU DO THIS TO ME?
Also, he ships Batman and Wonder Woman. I don’t hate him any more.

So, in conclusion, a decent, twisty-turny, if slightly off-kilter volume. Art is pretty in the beginning, a bit less so by the end?

1 thought on “Injustice: Gods Among Us: Year Three, Vol. 1 by Tom Taylor”