Injustice: Gods Among Us: Year Two, Vol. 2 by Tom Taylor

Injustice Year Two, Vol.2: More emotional highs and lows than a hormonal adolescent, all in less than 200 pages.

I loved the beginning and the end of the book, but the middle was just sorta boring. Like, why give Gordon cancer? So he could be the one person either Supes or Sinestro didn’t kill off? The whole bit with Clayface just seemed like an abrupt filler.
I also don’t understand whether Sinestro is a very smart villain or the Super Regime is just that stupid. I’m gonna go with the latter; they’re collectively about as bright as a doornail.

The problem is that by definition, heroism seems to be wanting to believe the best of everyone, and this is why the DC Universe needed Batman. Otherwise their own gullibility would have killed off everyone by now. By this volume, Superman has been firmly entrenched as an irredeemable dictator who will kill off an entire planet and a young mother in a fit of rage; Hal Jordan has been established as a glitch in the Green Lantern system. I used to like him once. Not any more. That was back in the days when he actually used his brain and didn’t turn to the dark side to save his girlfriend instead of waiting for any of the other million Green Lanterns to save her, like a sane person would do.

I can’t wait for Wonder Woman to come back and knock some sense into everyone. Sigh.

The climactic showdown does not disappoint. There is a whole living planet in the Green Lantern corps. A planet. Tell me you are not fascinated by that concept. I hate that they killed off Guy Gardner, who I was on the verge of marrying, but they did. On the other hand, Harley Quinn, who remains the best character by far, is only getting better and better. She’s characterized in an interesting light – she’s not a very good person, but not bad either. She’s still a riot though.

Speaking of which, I was going to give this a three star, but that opening interaction between Harley and Canary was way too good to ignore: 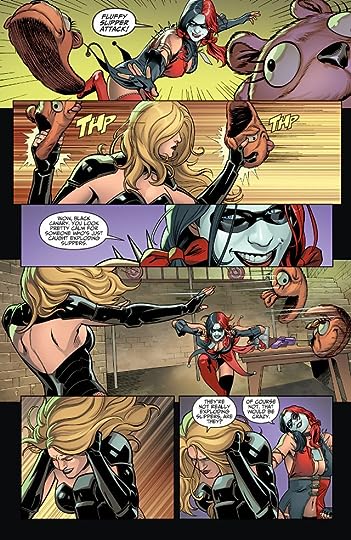 Female friendship in general is very well done. Relationships have always been the strong point in this series (and in Clark’s case, his weak point) and they haven’t let us down yet. This is probably best illustrated in the ending bit, where Taylor gives us a tiny ray of light in all the madness by reuniting Dinah and Ollie. Dammit, where’s my hanky?

(between sniffles) Go read it guys.

1 thought on “Injustice: Gods Among Us: Year Two, Vol. 2 by Tom Taylor”