Hawkeye, Vol. 1: My Life as a Weapon by Matt Fraction
My rating: 5 of 5 stars 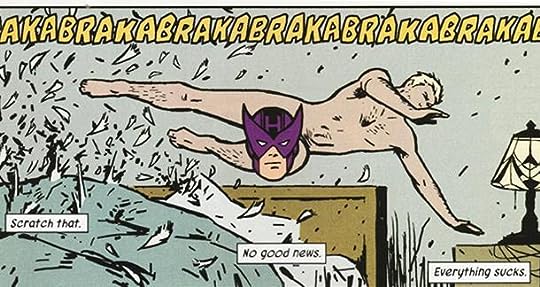 Now, I will admit that when I first heard about Marvel launching their “Marvel NOW” line (which is similar to DC doing their “New 52” reboot, except that “Marvel NOW” is not a reboot), I was a bit hesitant about reading any of the comic books from this line because:

1) I did not like the direction that Marvel was taking some of their franchises (X-Men in particular).
2) Since I have not been reading Marvel Comics (or DC comics for that matter) that long, I was afraid that I would not understand some of the new comics coming out since I have not read a lot of the previous comics before the 1970s and some from the 1990s yet.

But, after I heard so many good things about this comic book, I just had to put my reservations about the “Marvel NOW” comic book line on hold and give Matt Fraction’s hit series “Hawkeye: My Life as a Weapon” a chance! Lo and behold, I found myself loving this series and I wanted to read more from “Hawkeye!”

Basically in this volume, it details the adventures that Clint Barton, also known as the legendary Avenger, Hawkeye, has whenever he is not with the Avengers. Along for the ride in these adventures, is Young Avenger member Kate Bishop and she and Clint end up fighting crime in New York City while wielding their bow and arrows in the process!

Matt Fraction’s writing: Now I will admit that this is probably the first time I had ever read an “Avengers” comic book since I am more of an “X-Men” fan, but after hearing so many good things about this comic book, I decided to give Hawkeye a try and I found myself loving this volume! Matt Fraction has done a brilliant job at keeping this story self contained (which was what I was looking for when I picked up some comic books in the “Marvel NOW” comic book line) and I really enjoyed the solo adventures that Hawkeye went on. I also loved the way that Matt Fraction made Clint Barton into a truly hilarious and active character and I loved his little quips throughout the entire story. Some of my favorite lines from Hawkeye was when he was making fun of how the older comic books would set up the dialogues whenever they are translating foreign languages (like you know how the older comic books would tell the readers “translated from Russian” or “translated from Japanese”)? Well, his dialogue would go like this:

I also loved the way that Matt Fraction portrayed Clint Barton’s relationship with Kate Bishop as it is both heartwarming and hilarious to look at and it was fantastic seeing another character who had the same sharp-shooting skills as Hawkeye does. 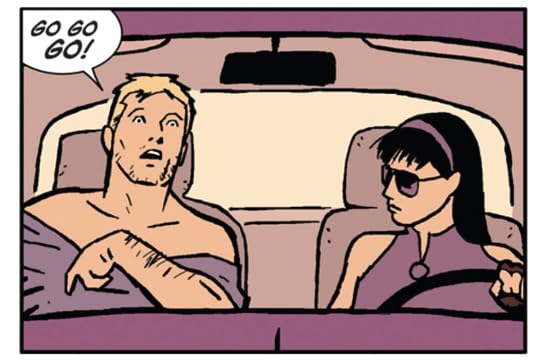 Probably the only issue that I did not care for in this volume was the “Young Avengers Presents #6” issue. For one thing, I do not normally read the “Young Avengers” comic book series, so I will admit that I was a little confused about what was going on, even though this issue is supposed to be when Kate Bishop first meets Hawkeye. Another thing about this issue was that I felt that the tone of the story was way too different from the tone of the rest of the volume, which was light hearted and action-packed while this issue was dark and had too much soap opera drama for my tastes. So, all in all, I think that this issue was just average and not as good as the rest of the issues in this volume. Although, I did enjoyed Alan Davis’ artwork in this issue as it was gorgeous to look at and the characters’ facial expressions were realistic.

Overall, “Hawkeye: My Life as a Weapon” is one truly brilliant volume for anyone who is a huge Hawkeye fan and I am definitely looking forward to reading more of his series in the near future!