Thor, Vol. 2: Who Holds the Hammer? by Jason Aaron

At long last, I got this from the library, read it and then promptly forgot to review it. Partly my fault, should have done it while it was fresh in my memory, but also, it was kind of a forgettable volume?

In the second volume of Thor, the central question is who lady Thor actually is, and old Thor (now Odinson) is running helter-skelter trying to solve the mystery of her identity. He doesn’t do a very good job of it, to be honest. Some other things are happening, which I have to strain to remember, but Freyja and Odin are steadily on the path to a divorce as Odin does what crotchety old men do best: act misogynistic and stubborn.
Actually, that might just be Odin.

This marital conflict explodes into a full scale war as Odin unleashes one of his Transformer robots (piloted by the ever reliable Cul Borson) on new Thor and Freyja pulls a Magnificent Seven on him, only with a lot of girls. I have to ask, why bring characters like Black Widow into the fight? She’s a human non-magical combatant. How would she possibly help against a superpowered metal giant? The feminism thing has officially been taken too far. 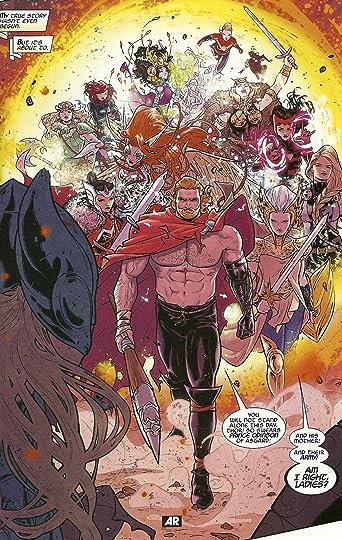 The art is very badass though. I’m a fan.

Meanwhile, Malekith the evil elf (is there any other kind?) and D. Agger the minotaur (unsubtle puns for the win) are plotting. I don’t remember exactly what they plotted, but it was insidious, which is all we need to know. Thor was going to interrupt this when Odin dropped the mecha on her. General disinterest on my part, because it’s just a soggy kind of plot and doesn’t really go anywhere.

Anyway, Thor and the Spice Girls beat down on Optimus Prime and Odin decides to back off, rather reluctantly. Odinson Thor makes it clear he doesn’t care to take the hammer back, since that boat has sailed. We get to find out who Thor is finally. And it’s pretty unimpressive. 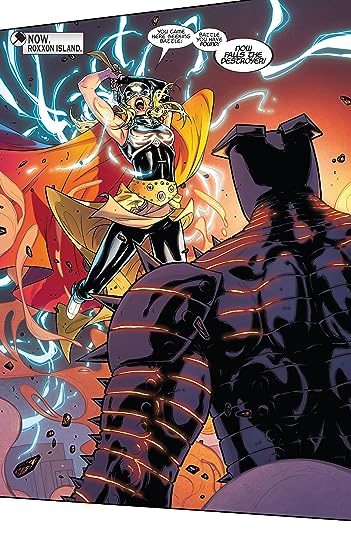 I wasn’t particularly impressed by the revelation of a cancer-stricken Jane Foster as Thor. First off, why does she have cancer? It seems like a desperate way to add tension to the plot. I think the idea of a female Thor is plenty dramatic in itself, no need to add this sympathy gambit. Secondly, why why why does she refuse treatment? I genuinely don’t get why a person who knows Asgard exists would not believe in magical healing. It simply doesn’t make any sense.
Though I suppose that the all girl cameo appearance by every female superhero in the Marvel Universe was a wink-wink nudge-nudge indication that it couldn’t be any of them. I respect that, writers.
I must admit I accidentally spoiled the identity of Thor for myself when I was looking for the name of this volume and ended up on the page for the third volume instead 😦

There are two extra stories at the end, one where new Thor runs around with Odinson’s friends ad proves her bro-ness, which was kinda cute but occasionally felt forced. The other one I surprisingly really enjoyed – an older spin-off story about Thordis where the writers had a field day playing around with ideas of Thor. Despite occasional cringey lines such as “I like these Avengers! They don’t get initimidated by my powers…especially considering I’m a woman!” and lady Thor actually getting married to Odin at the end (barf), it was generally enjoyable and well thought out. You can see the parallels to the current story, which is cool. 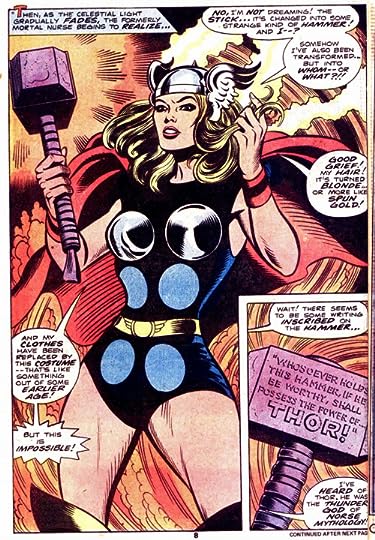 Overall, the volume isn’t bad, just not as brilliant as the previous one. I’m hoping the next one will be better, and in the meantime, the graphics are amazing, so sit back and enjoy the visuals.