The entire process of reading this terror can be summed up like this:

Who? What? HOW?
How did something like this come out in 2015? The Dark Ages were ages ago…

I don’t want to recount the plot because it gives me the hives just thinking about it. But in essence it is:

Magdalena (the new one) is sent out to kill Jackie Enchilada Esta-something
Jackie has IQ reducing conversations with his literal demons
A prostitute and an enthusiastic Christian zealot have a pointless conversation on a bus
Some girl is dying of a coma somewhere and is somehow related to Jackie
Maggie finds Jackie
Fight scenes ensue where Maggie says meaningful things like, “The power of Christ compels you” and “OMG”
Jackie and the tentacle monsters say meaningful things like “!@£% you, ^&*$!”
They keep breaking things
Meanwhile the Cardinal who sent Maggie on this mission turns out be less of a zealot than dude on the bus as he manipulates a young priest into dying
Bus crashes but hooker lady and old dude don’t die
Because at some point Jackie broke the Spear of Destiny and it ended up with zealot dude
Maggie continues to be annoyingly bigoted, Jackie hilariously annoying
Maggie loses most of her clothing because that’s how things work
The lady of the night and the preacher somehow give the Spear to coma girl
The preacher decides to convert the half-dressed girl by killing her in bloody fashion
Coma girl wakes up as possibly insane creature
Maggie decides she has to retreat advance in another direction and goes gome
Jackie isn’t having it
Maggie commences the bathing ceremony which gives her the Magdalena’s show-them-their-evil-past-power
Jackie interrupts midway
Josie and the Pussycats Maggie and the bombshell nuns fight Jackie, Maggie nude
Jackie’s having fun until Maggie does her Scarecrow thing on him
The silly gargoyles are continuing their useless commentary
Jackie ends the story by making a torture porn sculpture with the Spice Girls and a giant cross

Maggie is in a graveyard, sadly alive
A vampire eats a priest and some other people
Maggie strolls into priest’s church
Maggie starts a CSI investigation all by her lonesome
She deduces it’s a vampire and dismisses the idea
Maggie goes back into graveyard and finds vampires
She does a He-Man chant and the vampires pick their teeth with her
They kindly leave her alive because plot
Maggie calls in the Church’s Black Ops team to help
But turns out they aren’t needed cause the vampires actually have a virus (vampirus?)
Black Ops wants to kill them anyway
Maggie puts her foot down…onto their faces
Vampires escape, one Swat Kat dies
Maggie dies by gratuitous stabbing
Reader heaves a sigh of relief

I don’t need to read the next one to know how it ends. Maggie dies of indigestion because she never had intestines to begin with: 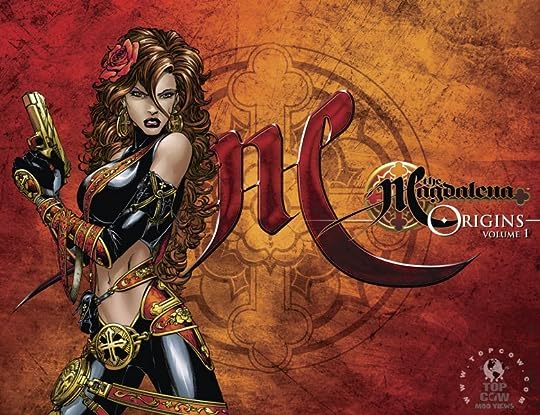 I can’t think of a single good thing to say. The art was bad, the characters were so stunted they were Smurfs, Maggie was freaking irritating and stupidly oversexualized, there were a million subplots making no sense and they made followers of any religion, Catholicism not withstanding, look downright idiotic. The only slightly entertaining thing was Jackie, who was only slightly less annoying than Maggie with the demons.

Whoever allowed this to even reach production stage, there’s a special place for you in hell.