The Avengers: Scarlet Witch by Dan Abnett
My rating: 1 of 5 stars

This book is so bad, it’s hilarious.
I understand the material is old (it’s stuff from the 70’s), it was a different time back then and comics are still not that kind towards women.
But.
I recommend this only if you:

Really, I can’t even begin to imagine what they were thinking when they republished all this junk. I’ll try to go through it story by story:

This one is about a 100 pages of the book, and is very well titled, because one presumes this was all the writer had in mind. It seems to be the precursor to every stereotypical male fantasy imaginable, including:

– Women being helpless left and right, whether they are warrior women or career superheroes
– A lot of shots of butts in the name of combat or training
– A whole page of Spiderwoman taking a shower
– Bondage and tentacle fetishes
– The most skimpy, impractical costumes on God’s green earth

No, really, if you though Elizabeth Olsen’s babydoll dress in the movie was not a good idea for battle, compare it to the book version. 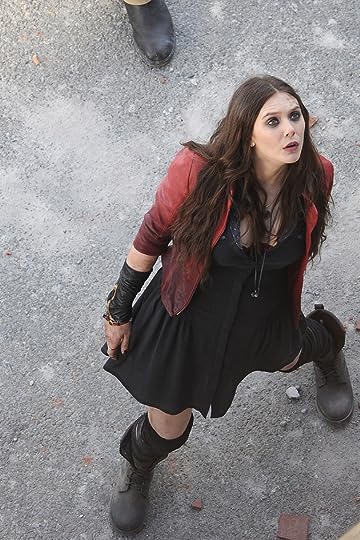 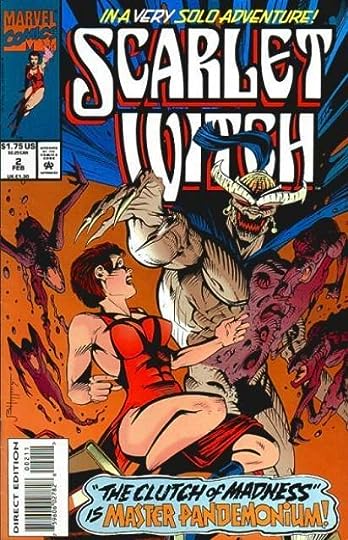 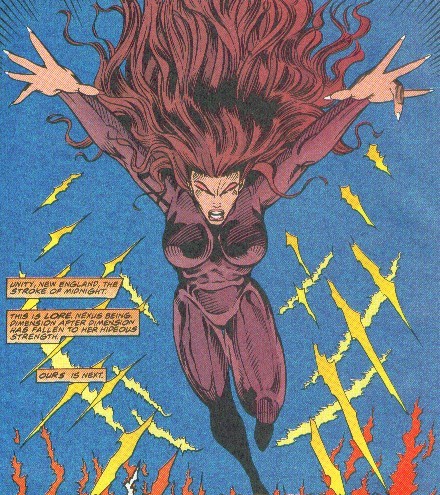 There’s also tons of dramatic narration, as if we can’t see what’s happening. Obviously, storytelling has changed quite a bit over the years, since no writer would endeavour to describe a crypt in words when there’s a two page panel of it.

In summary: a torture to read.

There’s an appearance by Doctor Strange in this one, just so you can understand how he got his name.
Some people on the set of a movie accidentally conjure up a fire-breathing creature that starts rampaging on the streets of Greenwich and it’s up to Wanda to save them. Only she won’t, for most of the story.
She runs in to ask Doctor Strange for help (god knows why) and he insists they have tea first. Wanda gently points out that the city is being destroyed.
Cut to panel of them having tea.
WHAT THE !@$# ?

But it’s all ok, because the monster is just misunderstood, and they send it home like in a cute children’s story. Awww.

A Love that Never Dies

Lest you be excited by that James Bond-esque title, don’t be. It was a completely pointless story where Wanda kinda sparkles at this grim reaper dude who elopes with her friend.
The End.

In summary: Vision is her husband? WEIRD.

For those who were curious about how the general public perceived the Scarlet Witch, this story tells you it was:
Daaaamnnn, she’s fine!

Wanda waltzes into one of Harvard’s libraries with the Quinjet and full Lauren Bacall outfit to consult some rare books on witchcraft.
Psst! I’m pretty sure she could have gone in as a normal person in jeans!

Then she meets this suspicious dude with the eye-popping sideburns who invites her back for dinner.
Ladies, when a man says he wants to show you his collection of rare books, that’s not what he means!

As it turns out, he really doesn’t like magic people like Wanda, so he uses a magic spell to send her soul back to the past with her ancestor.
If you take drinks from a total stranger, you might wake up as a pirate!

But the Scarlet Witch isn’t put off by a little thing like that, so a few pages of plundering, consulting and a guy in a Scooby-Doo costume later, she gets back to the present.
It turns out that her pirate ancestor Lucy was way more interesting than Wanda!

Then the intrepid Avenger tricks the Pastmaster into taking down the shield and reclaims her body to chase after the villain.
Only, she was feeling dizzy for a bit, so he gets away!

Birth of a Witch

So we get to the actual new story here, where Wanda first activates her powers. Spoiler: She’s favoured by some god whose name is collection of random consonants. There is a gypsy queen, a witch queen, a baroness, a werewolf, a sorcerer (?) and a desert demon (?), all which should have made for a good story, but didn’t. It was just uninteresting.

In summary: Lots of people in belly-dancers’ outfits and some magic chanting.

Then, at the very end, we finally get to see how Quicksilver and his sister ended up in the Avengers team. At first they’re running helter-skelter in some European village and become the targets of a witch hunt when a certain metal-bending mutant swoops in. It turns out that knowing Magneto is their dad is a bit too much for Pietro, so Magneto locks him up for his own good, Wanda breaks him out and all hell breaks loose. Well, not really, they just go into hiding for a bit and end up with the Avengers.

In summary: Why is everyone wearing XXL underpants? They’re taking up all the screen time.

I emphatically suggest you don’t read this one.