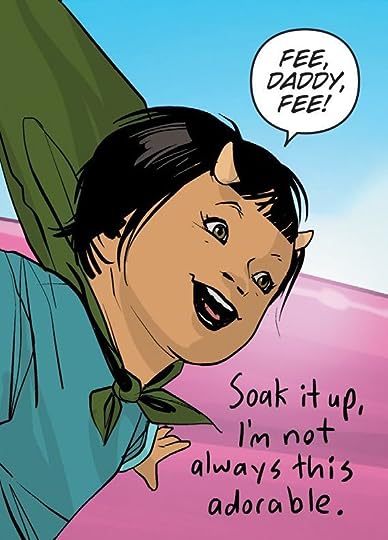 You can really see how this family is going through the growing pains in this one. And, once again, Vaughn and Staples create a fantasy world that is so incredibly not fantasy.
This volume? This is a real marriage.
Can we please fight about it in the morning?

Ok, so now that they aren’t running for their lives, the mundane existence of taking care of a family sets in…as it does with a lot of marriages.
Alana is working full-time as an actress on this space soap opera, and Marko is staying home with Hazel.
First comes love, then comes marriage, then comes a baby in the baby carriage…
But they don’t tell you what happens after that, do they? 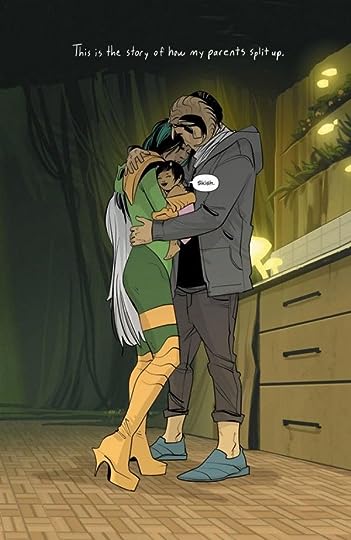 Yep. You aren’t really married till you’ve practiced your alibi in the mirror, at least once. Now, at some point, you’ll both laugh about how you ran into each other at Home Depot, looked into each other’s shopping carts, and saw that you were both buying tarp and duct tape.
But till then, you’ll go through that rough period known as:
Those Couple Of Years We Gutted It Out For The Kids. 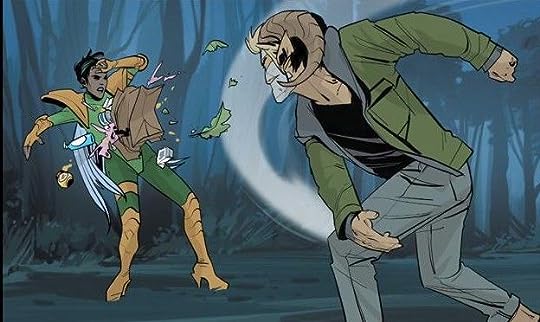 But when you haven’t been married long, and the memory of your glory days are still bright and shiny? Well, those first few knock-down drag-out fights can seem like the end of the world. 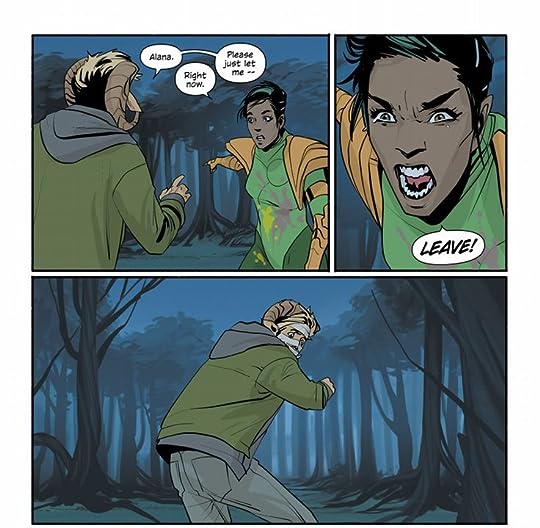 You’re also not married till one of you spends the night somewhere else…or at least storms off with the intention of spending the night somewhere else!
Most of the time you just *cough* drive around all angry-like, taking out your frustration by singing off-key to break-up music, and giving the finger to incompetent drivers. Eventually, you end up sitting in a parking lot somewhere, as the realization that hits that you don’t want to spend the night anywhere else. I mean, that’s a real hassle when you think about it, right? Wait. Did our song just come on the radio? *sigh* It must be a sign… 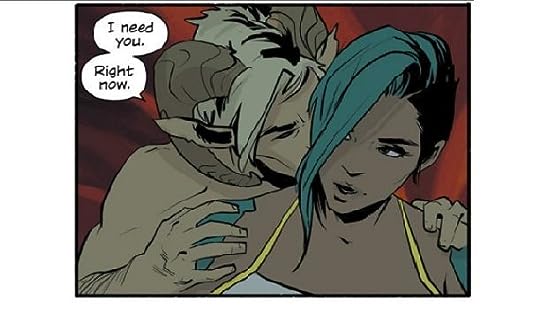 And so it goes…
I think Vaughn did a spectacular job of showing how each of them fell off the sparkly marriage wagon just a bit.

Alana starts taking drugs (recreationally) to help her fight the crushing pressure of being the only breadwinner, while working long hours at a soul-sucking job. 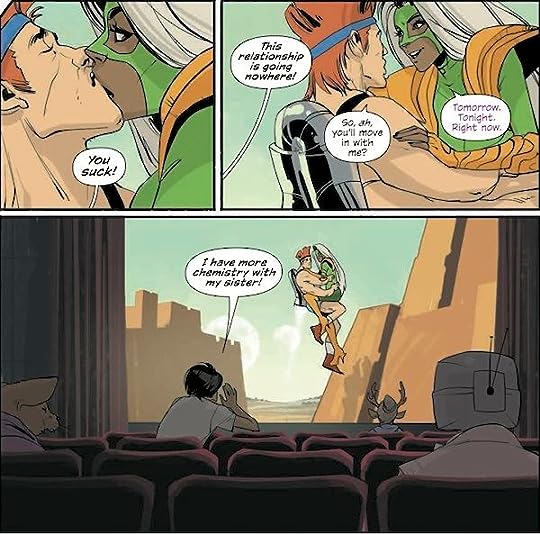 She misses her family, but if she doesn’t make money, they’re gonna starve. So, not a lot of choices for her, but to put her head down and keep going. 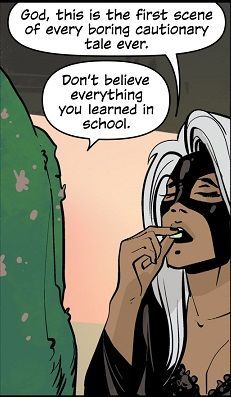 Ahhhhh. That feels much better… 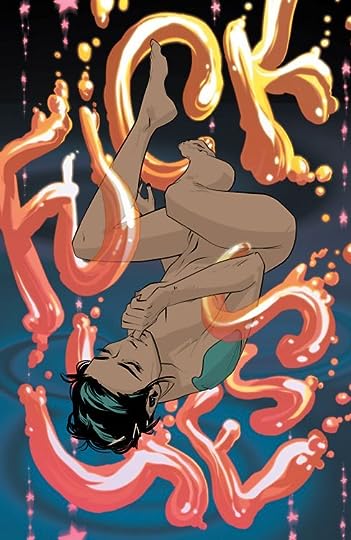 That sort of thing usually ends badly, and Alana is no exception to the rule. After a while, it gets easier and easier to just zone out instead of facing her problems. The lines start to blur, and the next thing you know… 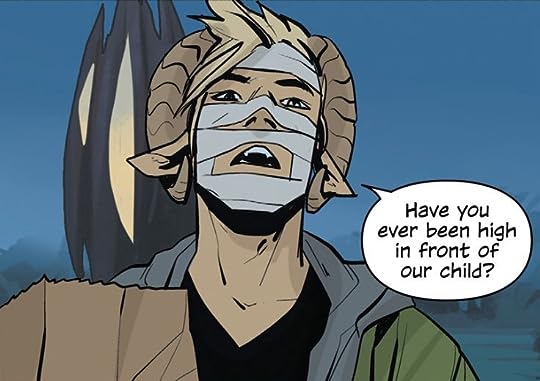 Meanwhile, Marko becomes the full-time parent. Which, after having done this myself for well over a decade, I think I can speak with some authority when I say, this is the most rewarding job ever.
BUT IT CAN SUCK YOUR WILL TO LIVE.
First, you don’t get paid for it. And the first person who comments, and says that you get Paid in hugs!, wins an ASSHOLE award. I’m not sure how your electric company works, but mine does not accept HUGS as a form of payment.
So. NO PAY.
Second, Adult Interaction.very important.
And a huge problem arises when you get stuck on playdates with ratchety parents that you don’t like. The flavors usually taste like Annoying-Helicopter, Complains-About-Spouse, Kill-It-With-Fire-Religious-Nut, Sports-Dad, My-Child-Can’t-Do-Anything-Wrong, Organic-Only-Momma, Let-Me-Tell-You-About-My-Pitiful-Sex-Life, and the absolute worse…The-Clinger.If you don’t have a Clinger in your life? Look in the mirror.
You know, just to be sure…
However, every now and then you meet someone you really like. 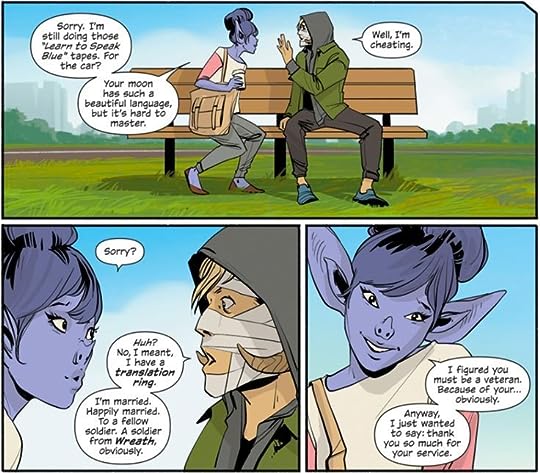 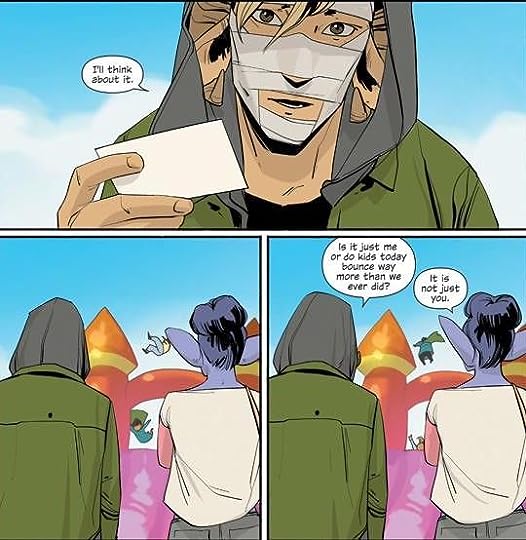 In Marko’s case, he’s feeling alone and abandoned. He misses his wife, who’s gone all the time, and when she is home? Well, she’s acting kind of distant and odd. He’s also worried about how to keep his daughter safe, but still give her a full life. And now he’s got this cute mom, who seems to understand exactly how he feels, practically throwing herself at him. 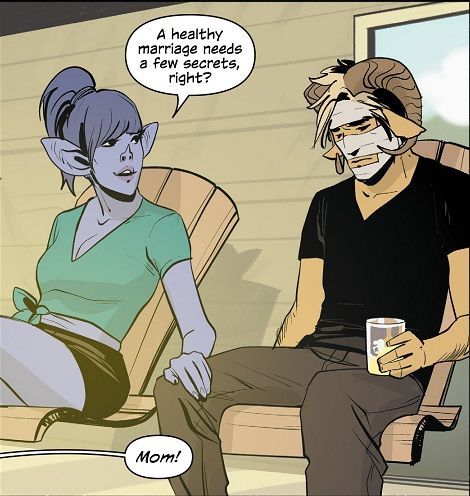 And that’s only half the story.
The rest includes a Robot father who’s become totally unhinged over the death of his child, Gwen & Sophie searching for a way to cure The Will, a Prince on a mission of revenge, a missing baby, and a very unlikely team-up. 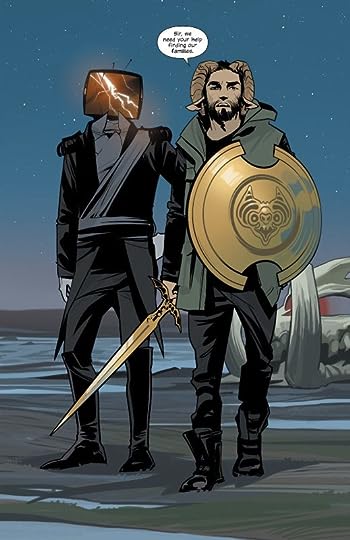 At first, I thought this one didn’t quite measure up to the previous volumes, but the more I considered it, I realized this one was just different. I’m really enjoying watching all of these characters grow and change! I know I’m the eighty-billionth person to say this, but this is a fantastic title!