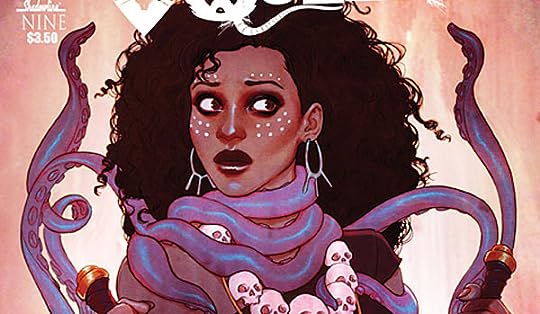 After reading the first volume of “Rat Queens,” I just took my little ole self to the library and grabbed the second volume of this fantastic series “Rat Queens Volume Two: The Far Reaching Tentacles for N’Rygoth,” since I really enjoyed the first volume so much and I wanted to see where our lovely Rat Queens would end up at next!

In this volume, the Rat Queens are celebrating their victory from the events of the first volume and they now each have a love interest that they spend their time with (except Dee, it appears). Meanwhile, a mysterious and disturbing force is coming to their city and a vengeful ex-partner of Sawyer’s has kidnapped him!

What is this nightmarish force that is terrorizing the city and will the Rat Queens save Sawyer from this disaster?

Read this volume to find out!

Kurtis J. Wiebe’s writing: Wow! This volume was just as good as the first as the characters are still highly entertaining to read about and the threats just keep getting bigger! I loved the way that Kurtis J. Wiebe developed the mysterious conspiracy that was hinted at in the first volume as we actually get our first look into the evil demon N’Rygoth and the mayhem it caused for the characters and their hometown. I also like the fact that this volume was much darker and intense than the first volume as the stakes are higher for the main protagonists and the ancient conspiracy actually takes center stage in this volume. Kurtis J. Wiebe also did a fantastic job at developing each member of the Rat Queens, especially Dee and Hannah as we find out more about their background history, especially with Dee and her history with the demon N’Rygoth. I also like the fact that Sawyer and Hannah’s relationship with each other is developing in this volume as it shows that Hannah truly cares about Sawyer when she found out that he got kidnapped and tried everything in her power to rescue Sawyer. 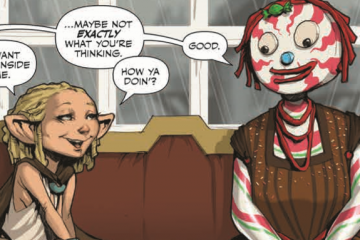 For anyone who does not like nudity, gore and strong language, this volume contains quite a bit of all of the above. The nudity is especially dialed up in this volume as we see many characters completely nude and performing sexual acts that might not go over too well with some readers. Also, there are many images of characters being cut in half or being stabbed to death, which are all shown in graphic detail and that could be disturbing for some readers.

Overall, “Rat Queens Volume Two: The Far Reaching Tentacles of N’Rygoth” is definitely one volume you should check out, especially if you have been enjoying the “Rat Queens” series as much as I have and want to see more adventures from everyone’s favorite tough as nails girls!