What the fuck just happened here?!
Wow. I officially loathe one of Snyder’s Batman stories.
Alright. I’m well aware that I’m going to be standing out here by myself, but I fucking HATED this. Like, I can’t even describe the rage I feel right now. Just pure fury mingled with crushing disappointment.
Well, what do you know? I guess could describe it!
Maybe Snyder has been the king of the Batverse for so long now, that he’s started believing his own hype? I mean,
really
?!
You may want to have those looked at, buddy.

*deep breath*
I did really like parts of it. So there’s that.
Capullo’s art is amazing. Just spot-on, wonderful, and haunting. 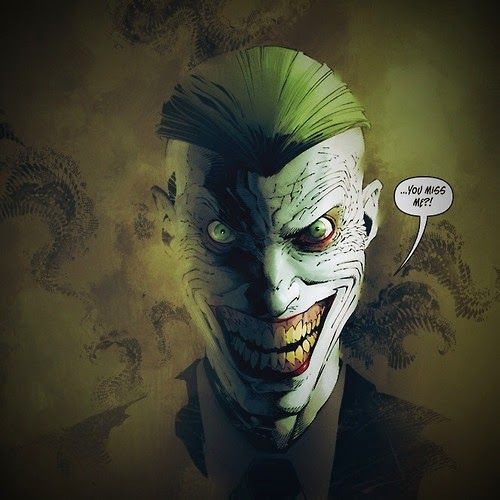 The facial expressions are perfect. Loved the way he drew…everything. 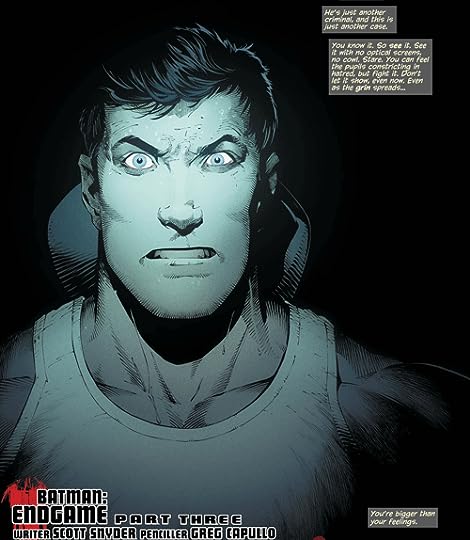 Warning: Spoilers! Lots of ’em.
I’m not going to be able to properly bitch (or have a full-on tantrum), unless I can talk about what happened. If you haven’t read this yet, you may want to stop reading and come back later.

Alrighty, the first part of the volume had me all aflutter!
Batman was fighting the leftover effects of Crane’s fear toxin, and he kept having these vivid dreams about his death. Julia was still helping Alfred with everything while he recovered, and it looked like their relationship was vastly improved.
I don’t know what happened in Volume 3 of Batman Eternal yet, but it appears they are living in some building previously owned by the Court of Owls. I hate the Owls, and I thought we were done with that whole hokey storyline, but I’m willing to let it slide.
Anyway, I loved Bruce’s interactions with Alfred. 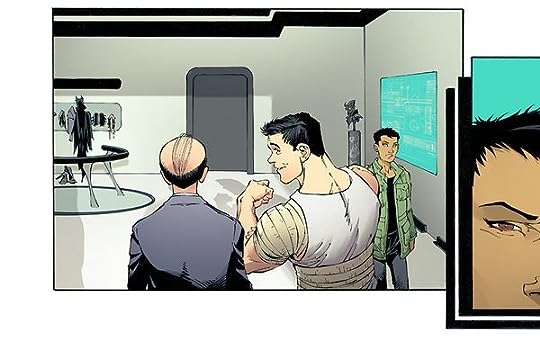 Ok, then Wonder Woman popped up outta nowhere and started beating the shit out of Bruce. She wasn’t making a whole lot of sense, and I thought it might be another dream. Apparently not… 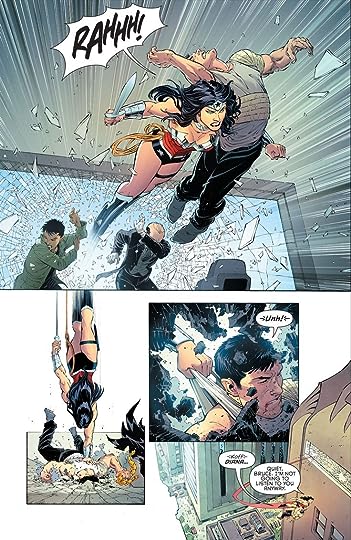 He managed to take her down, but, by that point, Aquaman & Flash were also both after him.
Boom! He pulled on his Justice-League-Taker-Downer suit, and incapacitated both of them. Nicely done! But he still didn’t know what was causing them to go nuts. 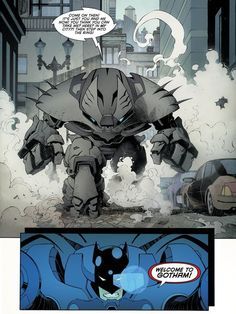 And then Superman showed up, and everything became clear (ish). 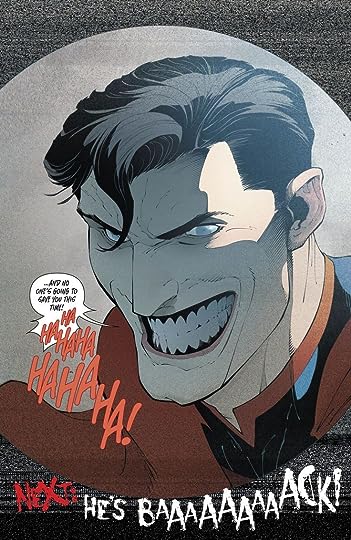 The Joker’s back!
And he’d managed to infect the Justice League with a special Joker Toxin. Batman narrowly escaped Superman, and (somehow) managed to get him, and the rest of the League, confined at A.R.G.U.S..
I’m assuming Alfred and Julia did this off-page, because when Bruce woke up (Clark hits hard!), the JL had already been hooked up to IVs.
Up next? Synthesize an antidote.
The bad news was that Joker let his toxin loose in Gotham, and it was spreading fast. The reallyreally bad news was that there seemed to be no way to make a working antidote.
I was on the edge of my seat by then, baby!
Why can’t they find an antidote? 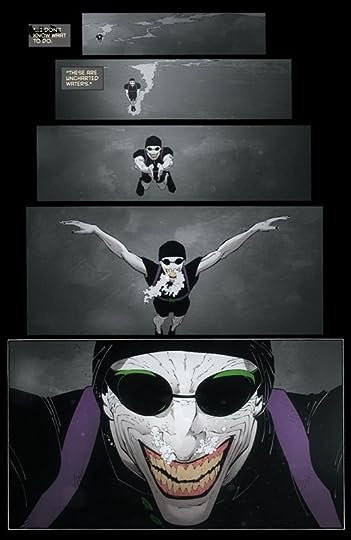 Ok, sounds pretty awesome so far, right?
Well, it was!
And then it all stared going downhill for me. At first, it was just little things (how did Joker managed to dose the entire Justice League?), but I brushed them aside, because I’ve been trained to blindly trust Snyder.
But also because of cool jump scares like this:

But within that panel lies the problem.
I AM NOT FUCKING KIDDING ABOUT THE SPOILERS!
TURN YOUR ASS AROUND, RIGHT THE FUCK NOW!

First, the fact that Joker was masquerading as the helpful doctor/intern from Arkham (Eric Border) that Batman has been working with, wasn’t a shocker to me. I’d been wondering when they were going to ‘spring’ that one on us. I mean, come on, he’s been shady from the start, but Arkham Manor pretty much confirmed it for me.
I can’t be the only one who was thinking that… 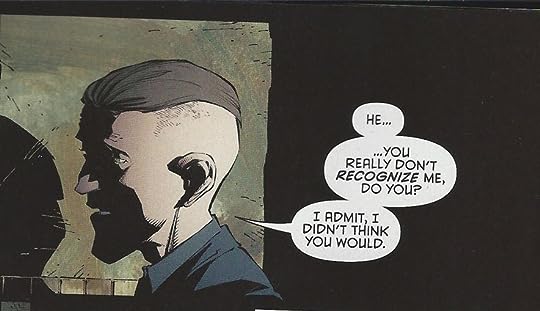 The next step is a doozy.
The Big Twist is that the Joker can’t be killed. He’s immortal like Vandal Savage, Ra’s al Ghul, or Shovel Face from Twilight.
And he’s been around since (at least) the beginning of Gotham. 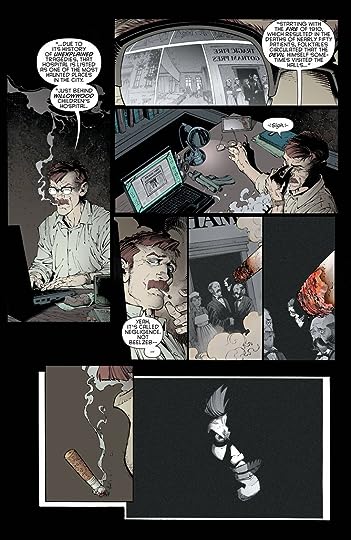 DUM. DUM. DUUUUUM.
So…now we have some new convoluted Joker origin story? And he has powers? Has always had powers?
This explains why the skin on his face has healed itself.
Oh my God, I never thought I’d actually miss the fact that his face wasn’t attached anymore, but I’d rather have a totally human Joker without his fucking face, than WhatEverTheFuck Snyder was trying to sell me here. 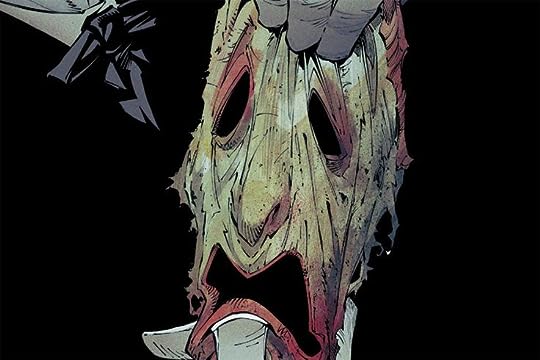 Still, I trusted him.
He’s the Goddamn Batman Snyder!
In my mind, I had full faith that he was going to iron out the kinks in this storyline.
It was an elaborate ruse! Or Bruce was in some Crane induced delusion!
The possibilities were whirling through my mind, even as I watched each corny plot thread unfold. 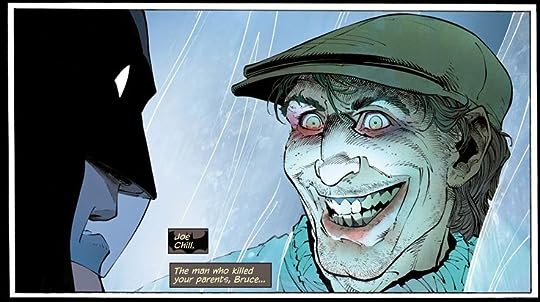 Oh my! Joe Chill (exposed to the toxin) is waiting to kill a family. It’s been set up by Joker to look just like Crime Alley! Oh! Batman saves the family, but the toxin spreads to the adults, so he can only rescue the boy.
I’ll bet the boy is somehow part of Joker’s plan! 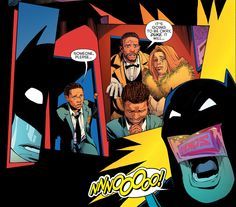 Um…nope. Evidently it was just an excuse for Batman to save a kid.
Whuuuut?
Did we really need yet another reminder of the gunshot, the pearls falling, the sad little boy crying in the rain?

Let me go ahead and answer that for you. No, we did not.
Whatever! In Snyder We Trust!
So when Joker broke into the Batcave and chopped off Alfred’s hand? 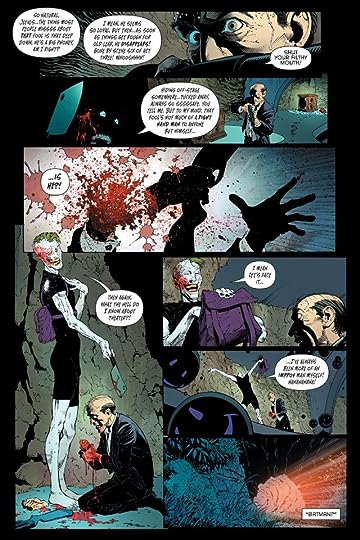 I trusted him.
And when he stole the giant Dinosaur to use in a parade because that’s such an original fucking idea? 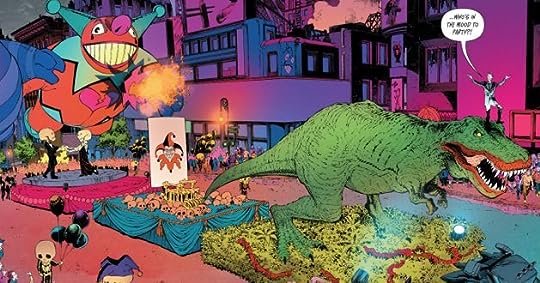 I trusted him.
And when he had to go to the stupid-ass Court of Owls to find out if the Joker was truly immortal? 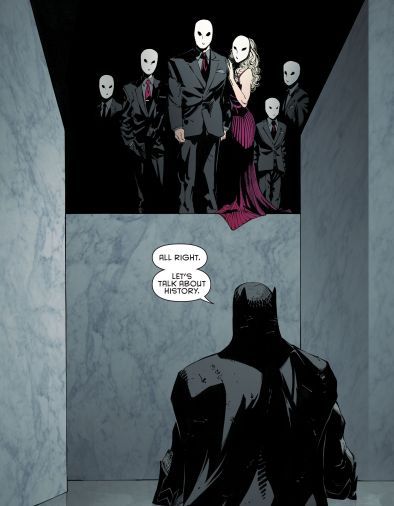 I still trusted him.
Then have the world’s lamest fight with one of their Talons?

I trustehhhh…well, if I’m being honest, I was starting to get pretty worried at this point. And, it turns out, I had every right to be.
Joker isn’t immortal, he’s just found some sort of a Lazarus pit to heal himself. Of course, the key to saving everyone in Gotham (from the toxin) is whatever’s in that Pit Juice.
*rolls eyes*

The showdown culminates with Batman & Joker in a cave full of explosives.
They proceed to simultaneously stab and psychoanalyze each other to death.
Dr. Phil, what do you think it means when Joker lodges a playing card in Batman’s eye?
Well, Anne, I think it shows that they are definitely two sides of the same coin. They can’t live without each other, and so they will probably die in this cave together.
WhatTheFuck are you talking about, Phil?! Oprah lied to us! Self-help guru, my ass! You’re nothing but an obnoxious bully with a receding hairline, and smarmy grin.

But it turns out Dr Phil was right.
Yep. They killed Batman…again.
I swear to God, I just now finally feel like I’m caught up on all of the shit from the last time he died, and they’re doing it again?
I guess Nubby Alfred could always step up as the next Dark Knight, if they wanna shake things up for a year or so. 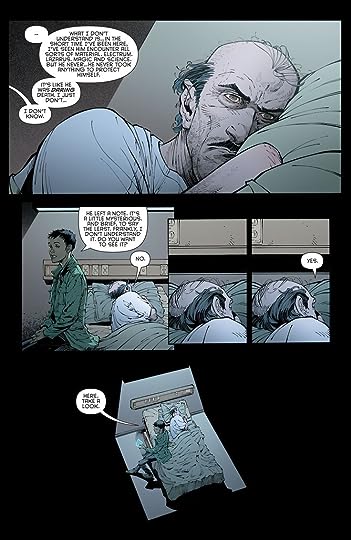 The final nail in the coffin though?
Batman left a note.

Luckily, Alfred was able to translate the one word note that said Ha.
Blah, blah, balh…Batman’s story will always be a tragedy, because that’s the way he wanted it.
Live bravely, smile at the void, and eat cake…
Or something like that.
*vomits*
I can’t believe this shit. I CAN’T BELIEVE THIS SHIT!
You just did this, you idiots! Why don’t you kill off someone who hasn’t been dead in the past few years?
Green Arrow and Superman haven’t been dead in a while. Or how ’bout Hal? Maybe Spectre could come back and take him over again?
But no. Let’s kill Batman. Marvel got rid of Wolverine, so we need to off our flagship character, as well.
Great idea! 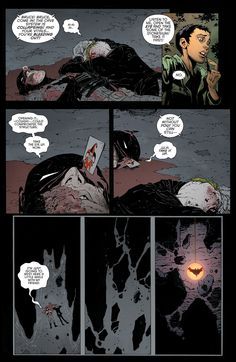 *sigh*
Ok, the beginning of the story was great, and Capullo’s art deserves 5 stars all by itself, so this was not a total loss.
Again, I know most of you will love this, think it’s an ass-kicking story, and continue to worship this run. And I don’t want to argue with you, or try to change your mind. This is simply my (fairly worthless) opinion.

Ugh. I’m exhausted from hating Endgame so much. I’m going to bed.

Initial thoughts:
Wow. I gotta think about this one for a bit…
My knee-jerk reaction is a hearty fuck you to Snyder.

I received a digital copy from NetGalley & DC.