Revival, Vol. 2: Live Like You Mean It by Tim Seeley

The more I read of this series, the more I struggle to keep the intrigues and characters’ relationships (hell, even just the characters) straight. It doesn’t get easier – it’s just more disconnected vague allusions to a bunch of small-town politics and melodramas, and I’m realizing that the base premise of this series is just a false promise.

I don’t think Seeley and Norton are doing a horror book or a supernatural thing – I think they’re just stringing up a set of zombie lights to illuminate the ongoing tales of a bunch of people with varying shades of grey cast on their souls, meandering through their varying weirdnesses and minor misadventures. Being weird and unpredictable because they can, or because it’s “dramatic”.

END_OF_DOCUMENT_TOKEN_TO_BE_REPLACED

After reading the first volume, “Astonishing X-Men: Gifted,” I just could not wait to read the second volume in this fantastic series, “Astonishing X-Men: Dangerous!” Joss Whedon and John Cassaday has once again woven a truly interesting story that is way more intense than the first and is full of shocking surprises that will leave every X-Men fan shocked for the rest of their lives!

After the events of the first volume “Astonishing X-Men: Gifted,” a young student named Wing had lost his mutant powers when Ord, the alien invader in the last volume, took away his powers using the mutant cure. Unfortunately, because of this, Wing has decided to commit suicide…in the Danger Room! This then causes a strange and horrific occurrence at the Xavier Institute as a giant damaged Sentinel starts attacking the X-Men and the Danger Room starts haunting all the students at the Institute! Who is this mysterious being who is causing trouble at the Institute? Read this volume to find out!

Joss Whedon’s writing:
Once again, Joss Whedon has astonished me again by writing a truly creepy yet exciting sequel to this fantastic series! Joss Whedon’s writing is full of shocking surprises that really shocked me to the core, especially towards the end when it is revealed who is controlling the Danger Room! It was interesting seeing the Danger Room turn against the X-Men and I loved how Joss Whedon incorporated some of the horror elements from “Buffy the Vampire Slayer,” such as monsters and living corpses, into this volume as they made this volume such a shock to read through.

John Cassaday’s illustrations:
John Cassaday’s illustrations are simply amazing in this volume and I loved the way that he drew all the monsters in the Danger Room as they all look so creepy and realistic that I was literally on edge when I looked at the illustrations! I also loved all the characters’ appearances, especially Peter and Kitty’s appearances because they look so lovely together and their facial expressions are always drawn so realistically that I often find myself either sympathizing or rooting for the character. 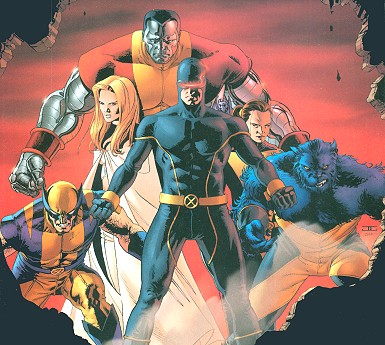 Peter and Kitty’s Relationship:
I just love this couple to death! Peter Rasputin and Kitty Pryde are the perfect couple for each other as they stand by each others side during battle and I just loved the little private conversation that Peter and Kitty have about what happened at Genosha because it showed how much Peter truly cares for Kitty’s feelings and how he wanted to protect her at all cost. I just thought that was the most romantic scene in this entire book (coming from a romance novel fan!) 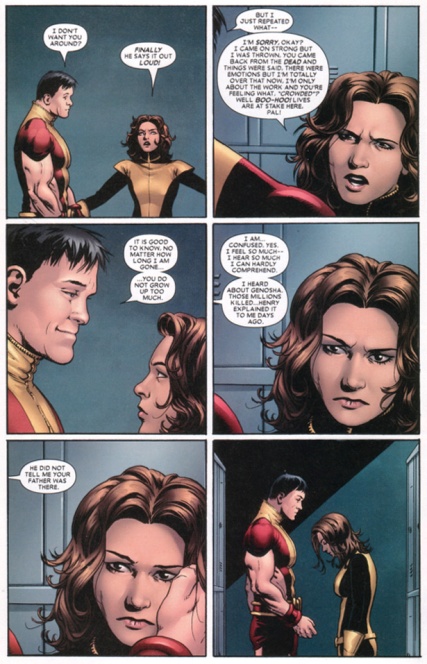 Be forewarned that there are some images in this book, mainly the appearances of the monsters that show up in the Danger Room, that will make your skin crawl, it certainly made my skin crawl and it was hard for me to sit through some parts of this book without my skin crawling. Also, the reason why I gave this a four star rating instead of a five star rating is because while this book was really interesting to read, I thought that it steered too far from the original plot of the first volume as it just jumps from the plot about an alien invader coming to earth to the X-Men trying to fight the Danger Room. This would usually lead me to wondering what is actually going to happen next and why we are off topic from the main plot and it also confuses me so much that I often cannot concentrate too much on the story at hand.

Overall, “Astonishing X-Men: Dangerous” was a great read and I am definitely looking forward to reading the third volume in the series “Torn” next!

Alright, I have actually first heard of the “X-Men” series when I was little and it was through a 90s cartoon series entitled “X-Men: The Animated Series.” From that day on, I was so hooked onto the “X-Men” franchise that I practically watched every incarnation of “X-Men” throughout my life which included the animated series “X-Men: Evolution” and I even watched all three “X-Men” movies. Now the truth of the matter is that even though I have heard of the “X-Men” franchise ever since I was a child, I never read the comics at all, until now. I never read the comics before because there was just too many universes involving everyone’s favorite superhero mutants and I am one of those people who cannot keep up with too many different versions of certain characters’ lives because I will get confused easily. Well, I stumbled upon this unique comic book from the “X-Men” series entitled “Astonishing X-Men: Gifted” and when I found out that Joss Whedon (creator of “Buffy the Vampire Slayer”) was going to write an “X-Men” comic, I was shocked and excited at the same time! Joss Whedon is surely an accomplished writer and I have watched “Buffy the Vampire Slayer” before and I really enjoyed that show! And now, without further ado, I will now discuss about what this book is all about and my opinions on this comic.

Cyclops and Emma Frost, who are now in charge of the institute, started reforming the X-Men once again to prove to the world that even though they are mutants, they are the heroes and they want to “astonish” the world with their heroic deeds. However, when a mutant cure reaches all over the world and many mutants line up to get the cure, will the X-Men’s efforts to prove to the world that they are the good guys fall in vain? And to add to that, the X-Men will soon reunite with a fellow mutant who was presumed dead. Who is that mutant? Find out once you pick up “Astonishing X-Men: Gifted!”

Joss Whedon’s writing: Joss Whedon’s writing was so brilliant in this comic! He really knows how to bring excitement and suspense to the storyline regarding the X-Men trying to figure out the secrets of this “mutant cure” and who is behind all of this commotion. I also loved the way that Joss Whedon is able to shock the audience with various scenes that came so unexpected in the story, such as the scene where we find out about the mutant who was presumed dead and when I found out about that situation, I was totally shocked beyond all reason and yet I was extremely happy to see how the shock of this scene was written and shown. I also loved the way that Joss Whedon incorporated humor into the story at the right places, like Wolverine’s obsession with beer and that one popular line in the book where Wolverine is cursing like crazy and you just see a bunch of symbols indicating the strong language.

John Cassaday’s illustrations: John Cassaday’s illustrations were simply gorgeous and fitted this story perfectly. I loved how all the X-Men characters look so real and I especially loved seeing their expressions that ranged from anger to shock as it was amusing to look at. I also loved the lighting of certain scenes such as the X-Men going to the Benetech lab and everything inside the lab is shaded in green which fitted the brooding mood of the lab.

The characters: I have never seen such amazing characters from the “X-Men” universe in my entire life! All the characters were interesting without being boring at all and I loved seeing the actual conflicts they have with each other, especially between Emma Frost and Kitty Pryde as they clearly have contempt for each other due to Emma’s horrible past. Even though I will always be a Cyclops/Jean Grey fan, I thought that the relationship between Emma and Scott was pretty interesting and they seem to share some kind of bond that I never would have seen in any other comic. I also loved the fact that Kitty Pryde seems to be the star of this issue since the media rarely focuses on her character and what was so interesting about her character was that she resembled Buffy from “Buffy the Vampire Slayer” in being the heroic heroine who would do anything to save her friends from disaster.

Overall, I really enjoyed reading “Astonishing X-Men: Gifted” and I am looking forward to reading up on the next issue “Dangerous” from this fantastic series! If anyone has ever read the “X-Men” series before and you want to recommend me some titles, please recommend me some “X-Men” titles that were really great to read!