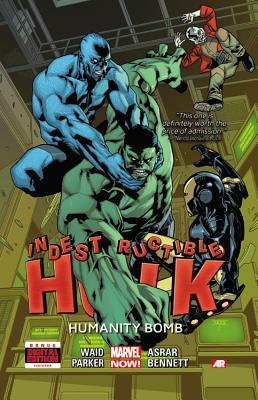 Dr. Bruce Banner is really trying to give this scientist thing a go. He has a deal with S.H.I.E.LD. – they let him invent stuff that will benefit mankind and he will let them toss the Hulk into untenable situations. The problem is lately he’s one step behind all the other nerd boy scientists in the Marvel universe. Enter Tony Stark. Condescending, bullying asshat, Tony Stark. “Bruce you have 48 hours to build a device that will save the Earth, blah, blah, blah, but we’ll be back in 24.” Oh, and not to rub your nose in anything, Brucie, but your being out-smarted by Henry Pym (Mr. Viagra) and Reed Richards, as well.

24 hours later: “You built a bomb! Sorry, you can’t use it and we’re going to take it away from you. Na Na Na!!” What’s poor puny Dr. Banner to do? Turn into the Hulk and twist Tony Stark’s head off and use it for a paper weight.

This is a crossover to the Infinity mega-Marvel event and involves Hulk chewing gum, an anger eating monster, and Tony Stark and Bruce Banner teaming up again to fight a mad scientist, who’s turned himself into an island. Stark’s a lying, provoking asshat in this one too. *shakes head*

This title is starting to show wear and tear.