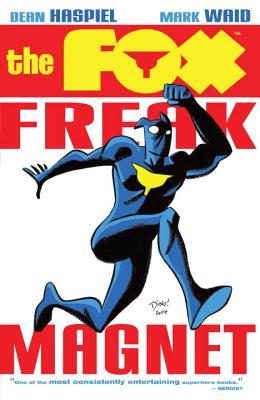 Are we talking Silver Age Marvel or DC?

Um, no. It’s more like Charltan or Gold Key comics.

If you aren’t some super nerd like me, that would certainly be a logical response. Even as a kid, I had a hard time laboring through this stuff. Still, there on the cover, it has Mark Waid’s name, so it would seem to be worth a read. Right?

– Some of the dialogue has punch and is amusing (this was co-written, so I’m assuming Waid had a hand in this aspect)

– The plotline won’t melt your brain out of sheer complexity

– A talking monkey from outer space

– A villainess who has tentacles coming out of her mouth. Cthulu anyone?

– There’s way too much written exposition. Show not say, after all this is a comic, a, um, visual medium.

– You’ll roll your eyes and not smile knowingly, at the sometimes grade C plotline

– The supporting characters are uninteresting – Shield (WW II super soldier just like Captain America), the Marvel (he has guns, he kills mobsters), Inferno (he breathes fire) and some guy who can transport himself. Whoopee!

– The topical references – Justin Bieber? For the comic book reader of the future, this will be like going back and reading 70’s comics for jokes involving Pia Zadora or Charles Nelson Reilly.

– The cartoony artwork. Not a fan.

– The annoying ersatz Yoda like speak from the Diamond Queen
“Not it’s clever. Painful no reading?” Her husband speaks normally. Go figure.

This is Archie Comics trying to gain a foothold into the capes and cowl stuff. Good luck!

Mama always said to avoid women who had tentacles coming out of their mouths.