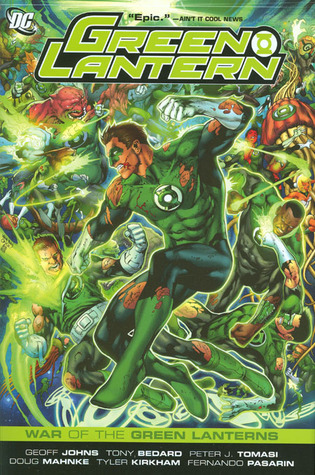 When my son was three, my wife and I introduced him to the joys of sushi. For some reason he could not get enough of avocado. As my wife and I were trying to flag down the waitress, my son started to make a grab for a big ball of wasabi, assuming that it too was avocado. My wife and I moving in (what seemed like) slow motion and screaming “no” could not quite stop him from popping it in his mouth. In about ten seconds, my son’s face turned crimson, his eyes started to tear and his cute willowy blond hair was plastered to his now sweaty head. I think a little steam might have been coming out of his ears and nose.

By now you’re saying, Jeff, what does this charming tale of parental neglect have to do with the Green Lantern. Well, I’ve always thought of the Green Lantern comics as a big ball of wasabi, not fit for consumption. And the wasabi is, um, green.

I haven’t had any desire to pick up a Green Lantern book since Hal Jordan went nuts and Kyle Raynor’s girlfriend was stuffed into a refrigerator. I just don’t have the head for tales of derring-do on a cosmic level. I tried to read the Blackest Night and didn’t even make it past the first volume. I picked up this because it had “war” in the title and I thought Green Lanterns beating the crap out of each other might be fun (I’m shallow).

The basic story is this: some entity is sore about having his entire civilization wiped out by the Manhunters and now he’s going to take revenge on the entire Green Lantern Corp by turning everyone into evil Green Lanterns so they can carry out his nefarious scheme to control the universe. Something along those lines. This doesn’t affect Earth’s Lanterns for some reason I can’t recall. They get to try on new colored rings which represent emotions. Red-Anger, Yellow-Fear, Indigo-Compassion etc. I have a new Lantern Corp color: Mauve – Indifference.

And what has Geoff John’s done to that unlovable, degenerate Guy Gardner, the DC universe’s punch line and punching bag? Everyone took their best shot at Gardner (he had it coming): Batman, Lobo, Doomsday, Metamorpho, etc… The last one was especially painful because Metamorpho was in metal form. Ouch. How did this guy get his ring?* Daffy Duck was a more worthy Lantern. In this tale, Gardner’s just unlovable. And dull.

I give it three stars because all the different color Lantern Corps in the same panel was pretty.

If you take nothing else from this review, it should be Green Lantern = Wasabi

*That’s a rhetorical question. I know how he got his ring. It doesn’t mean I have to like it.