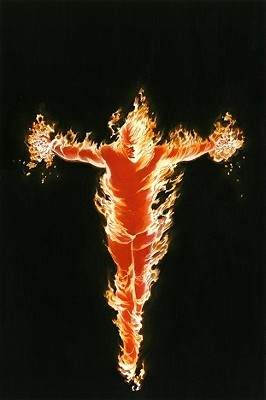 There’s nothing scientific (or rational) about the way I pick graphic novels out at the local library. Usually I’m picking my son up, the library is closing in five minutes, the librarians are all standing around giving me the stink eye and I’m rushing through the library’s selection in a kind of haphazard way – maybe I’ll read Superman, I haven’t read Spider-man in awhile, why the hell doesn’t this library have more Deadpool, I’ve never read this author/genre/hero before… Which is how I ended up choosing this volume. The Torch, Alex Ross, hmm, this might be interesting.

The Torch was a Golden Age character who could ignite himself at will. He can also fly, melt stuff and throw flaming balls of fire at Nazis. A main player in the story is his once teen sidekick, Toro. Teen sidekicks were big back in the forties. Everyone had one, except Namor. Misanthropes generally worked alone.

It seems that The Torch and Toro, no longer a teen, have both been brought back from the dead for the umpteenth time. The Torch is an android, who learns how to be human by interacting with people. Like Data on Star Trek, but less amusing. Toro is a mutant, who first discovered his latent flame abilities seeing The Torch, afire, come out of a circus tent. Naturally.

The villain here is The Mad Thinker, another moniker that was the product of Stan Lee’s overworked imagination. If I’m an evil genius, I sure as hell wouldn’t even think of calling myself The Mad Thinker. “Mad” could mean you’re angry or insane, neither of which conjures respect from the super hero community.

Anyway, the story revolves around The Mad Thinker’s scheme to not only bilk A.I.M out of a ton of cash but also to take over the world (Okay, mad = insane). Throw in cameos from Vision (he and The Torch are kind of like cousins), the Fantastic Four, a bunch of android Nazis, Namor, A.I.M lackeys with the beekeeper getups, mind control on planetary level and you have a hot (heh) mess.

Alex Ross’s contribution are cool cover art (Nobody draws a guy enflamed quite as cool as Ross) and the basic storyline, which is how this mediocre tale was probably green lit by Marvel.

The cover of the second issue of this volume. 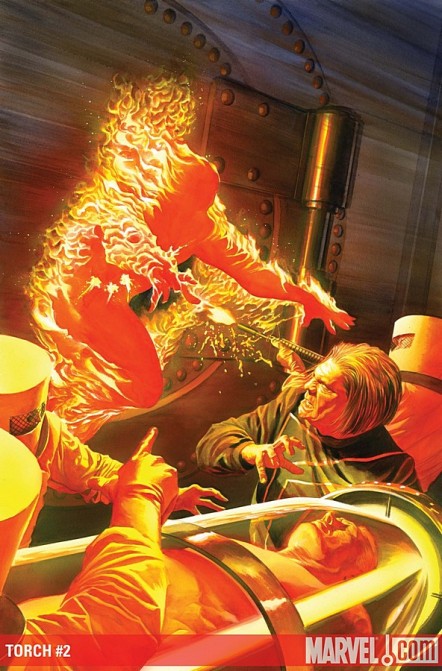