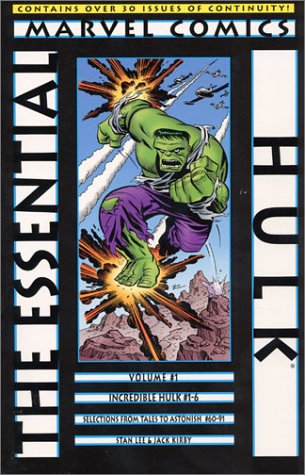 This is prehistoric Hulk written by Stan Lee. The Hulk character was a tough one to draw a bead on and make compelling and most importantly, marketable, which is why the number of different versions of the Hulk in this volume alone will make your head spin. From brute to toddler brain to communicative lummox – does he sound like he grew up in Brooklyn or Iowa – is he gray or green? The only thing consistent is his pants – always purple. He even sports a pair of ugly-assed shorts for awhile. It’s no surprise that the original Hulk run lasted only six issues.

A workable concept that Marvel hit upon was have Hulk interact with other heroes in the Marvel universe – Spider-Man, Ben Grimm, Hercules, Daredevil. These crossover issues are some of the few that jump out from this collection. There’s a two-part issue (sadly not included here) that saw the combined might of the Fantastic Four and The Avengers try to take the renegade Hulk down. I believe it was the first battle between The Thing and the Hulk. It’s worth looking for.

I understand that putting these compilations together in black and white makes them affordable, but I still dislike them. The crossover from color to newspaper strip look rarely works and just makes the art work flat and unreadable.

For Hulk archivists and completists only.

If you want the low-down on black and white comics, ask my fellow blogger, Anne.  She’s the expert.

If Spider-Man can have a musical, why not the Hulk?

Blame it on Daddy (Duet between Bruce and Betty) (Take that Ang Lee!)

Strongest One There Is

Gonna Pound You into a Puddle of Jelly

The Man Inside Me (Hulk) (Featuring the Hulkettes)

The Monster Inside Me (Bruce) (Feature the Hulkettes)

When Bruce transforms into the Hulk, it will be done as an interpretive dance using big long purple ribbons.
Extra, Extra bonus content – Hulk serves beans